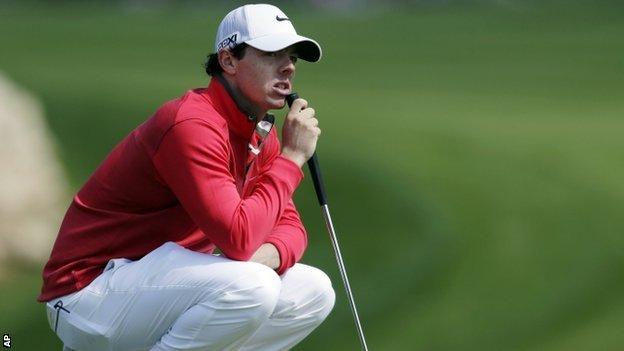 Rory McIlroy stayed in touch with the leaders after carding a one-under 71 in the third round of the Texas Open.

The Northern Irishman is six under for the tournament and four shots off American Billy Horschel's lead.

McIlroy was a late entry into the San Antonio event as he bids to play himself into form for next week's Masters, the first major of the year.

"I'm still in a decent position going into the last day and hopefully I can make a run of it," he said.

McIlroy briefly moved up to second in the opening stages of the third round with two birdies in the first three holes, before a bogey at the fourth and two more immediately after the turn blotted his card.

Birdies on the 14th and 15th saw the 23-year-old claw back ground and he might have finished the day even better placed after striking the longest drive of the day at the par-four 17th - but a poor second shot saw him settle for par.

It was the same story at the 18th when the world number two's second shot caught the wind and landed in a greenside bunker.

"I felt like I fought back well after I started the back nine with those three-putts," he said. "But I had a couple of chances coming in which I didn't take advantage of."

Overnight leader Horschel carded five birdies and three bogeys in a round of 70 as he maintained his two-shot advantage at the head of the field.

Jim Furyk birdied the 18th to move into second on eight under alongside fellow American Charley Hoffman.

McIlroy lies in a group of three on six under, while Ireland's three-time major winner Padraig Harrington, whose last tournament win came on the Asian Tour in October 2010, was also well placed in a group of four players including Scotland's Martin Laird on five under.

David Lynn is the highest-placed Englishman in the field on three under after a 71.