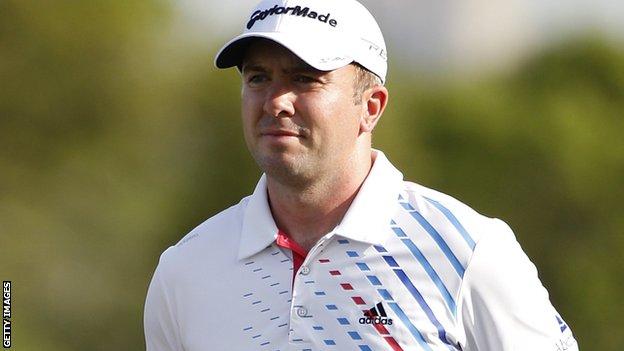 Scotland's Martin Laird shot a nine-under final round of 63 to hold off Rory McIlroy at the Texas Open.

Laird, 30, finished on 14 under, two shots clear of McIlroy, to win and secure his place in the Masters which starts on Thursday in Augusta.

Northern Irishman McIlroy carded a six-under 66 to finish second on 12 under ahead of the first major of the year.

I'm really pleased with my game and I think this has been a great week for me. To finish off the way I did today is great going into Augusta

Glaswegian Laird, five shots off Horschel overnight, began his stunning round with five birdies in his opening six holes to move into a share of the lead, and also produced birdies on 16, 17 and 18 as he closed out the win without nerves despite McIlroy's challenge.

"It's unbelievable. I've been asked probably 30 times in the last couple of weeks, 'are you in Augusta? Are you in Augusta?' and I've had to say 'no', and every time it kind of hurt me a little bit after playing the last couple [of Masters]," Laird told Sky Sports after winning his first tournament since the Arnold Palmer Invitational two years ago.

"So that was my major motivation - to try to get back into tournaments like that this year - and this win goes a long way in doing that."

McIlroy, 23, has yet to win a tournament in 2013 and was competing at San Antonio in a bid to play himself into form for next week's first major of the year.

Four shots off the lead at the start of play, the world number two gave himself every chance of victory with eight birdies, but also carded bogeys at the fourth and 10th.

He narrowly missed a 40-foot eagle putt at the last, but tapped in for birdie to guarantee second place.

"Even though I didn't get the trophy, Martin was just too good today - 63 in these conditions is just phenomenal," said McIlroy.

"I'm really pleased with my game and I think this has been a great week for me."

And the two-time major winner said his focus had been "just eliminating the stupid mistakes that I was making on the course - mental errors - and to finish off this tournament in the way I did today is great going into Augusta".

Ireland's Padraig Harrington, tied with Laird overnight in a group on five under, finished in a share of 10th after a closing 70, while David Lynn was the highest place Englishman, also shooting 70 to finish on five under.