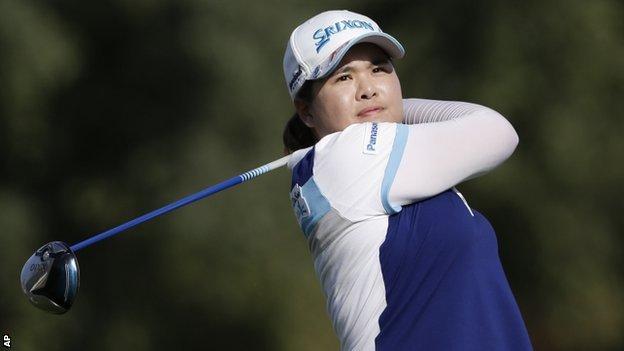 South Korean Inbee Park won the Kraft Nabisco Championship in California by four shots to wrap up her second victory in a major.

The 2008 US Women's Open champion led by three shots going into the final round and hit a three-under 69 to win and move up to number two in the world.

So Yeon Ryu, also of South Korea, shot 65 to finish second on 11 under.

Scottish veteran Matthew, who won the Women's British Open in 2009, had her best round of the week - a 68 as the 43-year-old world number 13 finished well.

England's Ewart Shadoff was tied for the lead after the first round before slipping out of contention but she was still pleased with her best finish in a major after closing with a three-under 69.

The 25-year-old is now looking to keep her form together for the LPGA LOTTE Championship in Hawaii later this month.

She wrote on Twitter: "Nice round to finish and for a top 10! Each week is getting better can't wait for Hawaii in a couple weeks! Thanks everyone for the support!"

Park, who started the day on 12 under, began her march to the title with birdies on her opening two holes while her nearest rival, Lizette Salas of the United States , double-bogeyed the first as she slumped to a seven-over-par 79 to tumble down the leaderboard.

From then on Park played solidly with four more birdies and three bogeys for a round of three under and 15 under total for the tournament.

"It has been a while since I won a major, and this is my second major of my career, and it feels very special," said a delighted Park afterwards.

Ryu had seven birdies and no bogeys in her final 18 holes as he closed with the lowest round of the day to jump up from joint 11th to second.