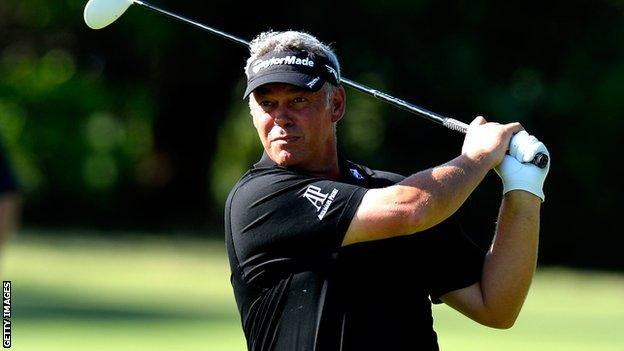 Former Open champion Darren Clarke has withdrawn from the Masters because of a hamstring injury.

The Northern Irishman, 44, suffered the injury playing tennis with his children while on holiday in the Bahamas and has failed to recover in time for Augusta.

"It is with deep regret that I will not be able to play at Augusta this year," Clarke told his official website.

"Playing in the Masters is one of golf's greatest pleasures and I am very disappointed to be missing out."

Clarke pulled out of last week's Texas Open and has been undergoing intensive treatment.

He later explained: "I was playing tennis with the kids about two weeks ago and that is when I picked up the tear on my hamstring. It was just one of those freak injuries which is really disappointing.

"I have done absolutely everything to be at Augusta; physio, ultrasound and icing, but I cannot physically turn through shots and there is no point in going to the Masters if you are not one 100% fit.

"Understandably, I am absolutely gutted not to be there but I hope to be fit enough to be back in action in the Ballantine's Championship on the European Tour in a couple of weeks' time."

Clarke had gone 10 years without a top-10 finish at golf's four biggest events before becoming the oldest first-time major winner for 44 years at the 2011 Open at Sandwich.

He has since struggled for form and missed the cut at Augusta last year on his first appearance at the tournament since 2007.

Clarke failed to register a single top-10 finish on the European Tour in 2012, but was vice-captain to Jose Maria Olazabal in Europe's thrilling Ryder Cup victory at Medinah.

He was also in the frame to succeed Olazabal as skipper for the 2014 Ryder Cup until hinting he would prefer to concentrate on playing.