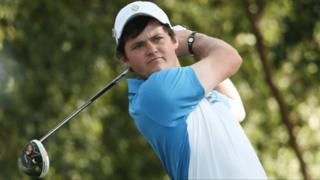 McIlroy and Dunbar prepare for Masters

BBC Sport NI's Stephen Watson talks to Northern Ireland players Rory McIlroy and Alan Dunbar as they prepare to play in the Masters at Augusta.

McIlroy expresses confidence that he can win his third major title while Dunbar is happy to be mixing it with the world's elite at the legendary Georgia course.