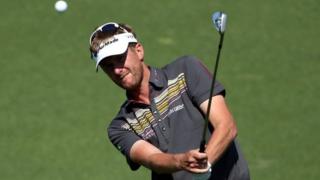 Stoke's David Lynn, runner-up in last year's USPGA Championship, tells BBC Sport that he is excited to be making his Masters debut at Augusta.

The experienced European Tour pro, who finished a best-ever 18th on last year's money list, is playing in only his third Major at the age of 39.

He tied 53rd at the Open at Royal St George's in 2003, but raised a lot of eyebrows by finishing second behind Rory McIlroy at the USPGA last August.

Lynn is paired with 1991 Masters winner Ian Woosnam and American Kevin Na over the first two rounds, teeing off at 13:22 BST on Thursday and 16:18 BST on Friday.