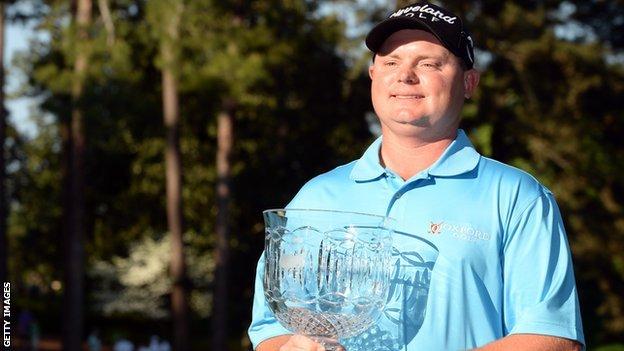 The winner has never gone on to win the Masters in the same year but Potter will hope to change that as he beat Mickelson and Kuchar in the play-off with Watney and Els not taking part.

Earlier, Augusta chairman Billy Payne announced that the top 50 players after 36 holes will make the cut this year.

Since 1962, the top 44 players and those tied for 44th after 36 holes in the major have made the cut, but that will be increased this week. Any player within 10 shots of the lead will also still qualify for the final two rounds.

In the annual par-three event which began in 1960, players allow various family and friends to caddy for them and veterans such as Jack Nicklaus, Arnold Palmer, Gary Player and 91-year-old Jack Fleck also took part on Wednesday.

Some players take the traditional event lightly, allowing caddies to take shots for them despite it meaning their score will not be registered.

Northern Ireland's Rory McIlroy had girlfriend and tennis star Caroline Wozniacki carrying the bag for him, but he did not register a score as the Dane took his tee shot at the ninth.

American Bo Van Pelt, perhaps concerned about the jinx of the competition, let his two sons have a putt each on the ninth despite looking set to take the lead having reached the green on five under.

Watney hit a hole-in-one on the ninth to share the lead, with Ben Crenshaw picking up the second ace of the day on seven.