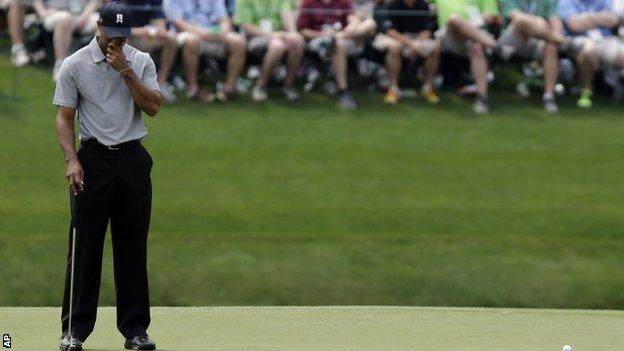 It was almost poetic. Defending Masters champion Bubba Watson pulled his opening drive into the trees. In the group behind, Tiger Woods fizzed a perfect three wood up the middle.

The king is dead, long live the king and all that. Except it's never that convenient.

Woods came into the 77th Masters as the favourite to clinch a fifth Green Jacket and his first since 2005. And that opening shot confirmed he was continuing the form that recently took him back to world number one and suggested a 15th major is only days away. It still might be, yet the next few holes brought us back to reality.

"I watched Tiger on the range and that was the best I have seen him hit and warm up for many years. I think the key to his round was that he holed out very well from inside five feet. The only blemish came at the 14th where he dropped a stroke, but other than that it was a very sound round and he hit very few errant shots."

Woods, his grey shirt matching the gunmetal skies on a misty morning at Augusta, was watched off the first tee by new girlfriend Lindsey Vonn, the US ski star, who was sporting a right-knee brace under a summer dress after injury in the World Championships in Austria in February.

The first sign this was to be no fairytale came at the second, when Woods pulled a fairway wood into the gallery short of the green. He escaped with a par after a good up-and-down, but pulled his drive again on the third and required another up-and-down from the back of the green for par.

October 2010: Drops to second behind Lee Westwood after combined 623 weeks at top

March 2013: Back at number one for 11th time, replacing Rory McIlroy

His tee shot on four and his second to five also prompted the Woods head drop or a grimace and a crumpling move, as though his historically bad knee had buckled from under him.

It hadn't, and this was no repeat of last year when Woods struggled to control the new swing he was building with coach Sean Foley.

It was just his annoyance at falling below his own exacting high standards that have brought three wins this season and sparked excited talk of a first major since 2008.

The swing appears natural now, part of him, and there were no strange rehearsals or forced practice manoeuvres witnessed 12 months ago - barring a frustrated repeat of his impact position after leaking his second to the right on the 15th.

There were some very good shots - such as the stunning tee shot to the tough back-right pin position on the short sixth for his first birdie.

That seemed to settle Woods and he visibly relaxed, sharing a joke with playing partner Scott Piercy while Luke Donald lined up a putt on the seventh green.

His driving at times, too, was a thing of monstrous beauty, not least the missiles up eight, setting up a second birdie, 15 and 17.

Woods, back top of the tour putting stats after a recent lesson from Steve Stricker, didn't have many close looks at birdies and didn't make any long putts - though the 60ft effort, started 20ft left of the hole, to within a couple of feet to set up his third and final birdie on 13 was impressive.

He three-putted the 14th green for his only bogey of the day, explaining how his approach left him no chance to go for the hole with his first putt.

His overhit third to the second hole was another example of how Augusta forces you away from the pin at times, he said. Sometimes the nuances are lost on the casual observer.

Afterwards, he said he struggled with the deceptively slow pace of the greens this year.

"The biggest challenge was the speed of greens, they weren't quite there," he said. "They looked it, but just weren't quite putting it. It was a good start, I'm only four back. I'm right there."

Grinding then, rather than poetic. There's plenty of time for all that.