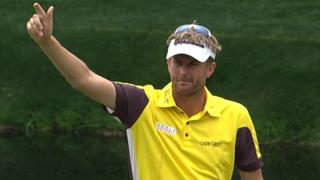 Britain's David Lynn says he is "delighted" after carding an opening round of 68 that leaves him well placed on his Masters debut.

The 39-year-old picked up six birdies, but dropped shots at 10 and 17 left him four under par.

Lynn is just two shots behind Australian Marc Leishman and Spain's Sergio Garcia, who lead the field after the first round at Augusta.