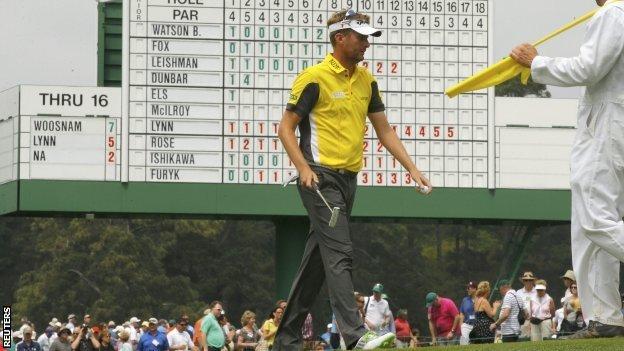 David Lynn said seeing his name at the top of the Masters leaderboard was something he would treasure after a brilliant first round put the Englishman among the leading pack.

The 39-year-old, who was runner up to Rory McIlroy at the 2012 US PGA Championship, led at the turn and was five under before finishing with a 68.

"It's not a bad thing to see your name up there leading the Masters," said the Wigan professional, who is tied fourth.

"It's something I can look back on."

Lynn is two shots off the lead which is held by Australian world number 108 Marc Leishman and Spain's Sergio Garcia.

Worksop's Lee Westwood is four shots off the lead. Like Garcia, the 39-year-old has yet to win a major and was runner-up in this tournament back in 2010.

"It was a good start, well, not literally, but it's a good first round," he said, having double bogeyed at the first before sinking four birdies between holes nine and 15.

"It wasn't the ideal start, but I've started majors with a double bogey before - the US Open last year sprang to mind - and I fought my way back to have a chance."

Fellow Englishman Justin Rose also shot 70, but failed to make the most of a great opener - two birdies in the first two holes.

"I've led three times after the first round, which has come to no avail," the 32-year-old world number three said.

"You can never win it on day one, you can only lose it. I didn't really make anything until the 18th, when I knocked in a nice 15-foot putt for par, which makes lunch taste good, really."

It was a memorable day for debutant Welshman Jamie Donaldson after he made the 24th hole-in-one in Masters history, during his round of 74.

"It's a tough shot, the pin's high up on the right side, so you don't know whether to take it on or sort of play just short left so you get a putt up the hill," he said of his feat on the sixth hole.

"But my caddie said 'Listen, you just go straight at it when it's up there' and that's what I did. And it was great to see the ball pitch right on line, just short, and it went in. It was pretty special."

Northern Ireland's Graeme McDowell said he was "disappointed" to have shot a one-over 73 but was optimistic about the second round.

"All in all the striking was OK, the iron play was solid and I made a couple of nice scrambles. I'm disappointed to be one over, but we can get back out there and get in the red."