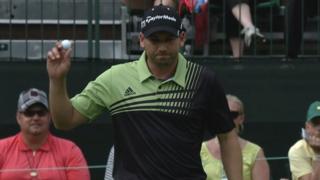 Sergio Garcia opens his 2013 Masters campaign with a six under par 66 to take a share of the lead at Augusta.

The world number 16 picked up six birdies during his first round of Thursday, as he hopes to win his first ever major.

Afterwards Garcia says he "feels so good" after his opening round, and is hoping to continue his form throughout the weekend.