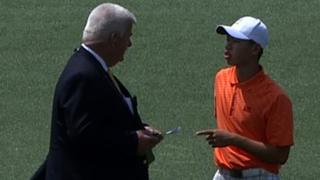 China's Tianlang Guan discusses the one shot penalty stroke he incurred on the 17th for slow play, leaving him with a second round 75 and a four over par total.

The 14-year-old had earlier been warned for slow play during the Masters second round, which he later blamed on the "switches" in the wind on the time he took to play.

Despite the penalty Guan made the cut to become the youngest golfer to do so at a major.