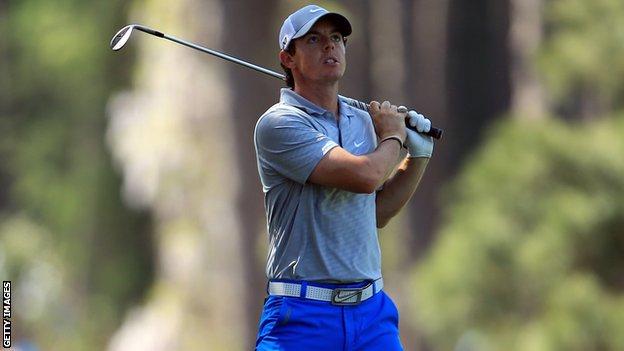 Rory McIlroy said he was pleased with how he coped with the Augusta wind on a difficult second day for the players at the Masters.

The Northern Irishman, 23, recorded a two-under-par 70 to move to two under for the championship and placed himself in contention for a third major.

"Digging in and grinding it out was pleasing for me," McIlroy said.

"A 70 was a good score today. The wind was in a real unusual direction. It's a tough enough course as it is."

The two-time major winner is four strokes behind leader Jason Day, with 19 players within four shots of the Australian.

"I made a lot of good putts for pars on the front nine," added McIlroy, who was one of only 25 of the 93 players to shoot under par on Friday. "I didn't play my best for the first few holes and the eighth hole eagle really got me going, really kick-started me.

"Then I started to hit some really good quality shots. I took advantage of a couple of easier holes on the back nine, 13 and 14.

"Anything under par today was going to be a good score and I stayed patient when I needed to and it was a good day."

A trio of Englishmen are on three under - Lee Westwood, world number three Justin Rose and David Lynn, who was runner-up to McIlroy at last year's US PGA Championship. No player from England has won at Augusta since Nick Faldo in 1996.

Westwood, who added a 71 to his first-round 70, said: "It was a solid day and I did what I needed to in the conditions.

"It feels like the sort of week where nobody is going to run away with it."

Lynn failed to repeat his heroics of Thursday when he carded four-under-par 68. The Wigan-born player made only one birdie, on the 18th, en route to a one-over-par 73.

"I was just grinding out the pars," said the 39-year-old.

"I actually had quite a few chances on the back nine, so to finally finish with a birdie I hit a fantastic shot into the last to about six feet.

"As we can see by the numbers on the scoreboard, nobody is running away with it, so boring is good."