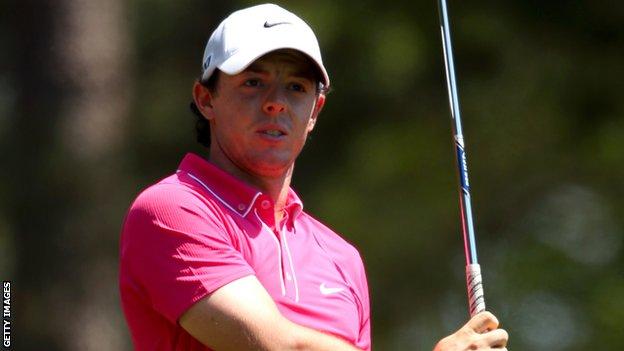 Rory McIlroy suffered another chastening Masters experience as a third-round 79 left him five over par.

Two years after a final-round 80 saw him blow a four-shot lead at Augusta, McIlroy again fell off the pace.

Starting the day four off the lead on two under, McIlroy managed an early birdie at the third.

He dropped back to one under but his round unravelled as a triple bogey on 11 was followed by a double bogey at the 13th as he found water both times.

The 23-year-old dropped a further shot at the short 16th after missing the green to the right and he needed to hole a five-foot par-putt at the 18th to avoid carding an 80.

McIlroy's triple bogey at the difficult 11th dropped him back to two over as he missed the fairway off the tee and then found water when he dumped his wedge third shot into the greenside pond.

That meant that he could afford no more mistakes if he wanted to realistically remain in contention to win a third major title.

After finishing the hole, McIlroy showed his frustration by throwing his ball into the water hazard in front of the green.

McIlroy ended the day 12 shots behind joint leaders Brandt Snedeker and Angel Cabrera, with Adam Scott one shot behind the leading duo on six under.

Tiger Woods and Tim Clark are three under and Rickie Fowler and Steve Stricker are still in the hunt on two under.