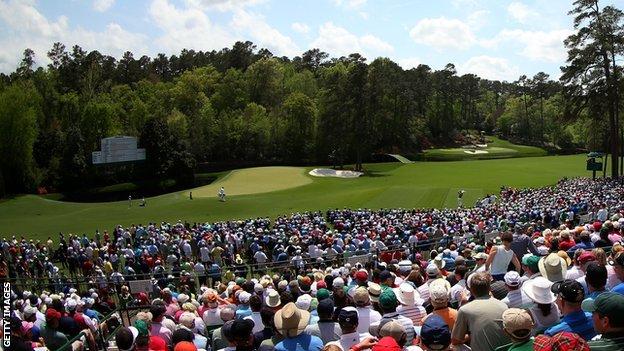 Augusta. Sunday afternoon. The back nine. The Masters. It is what golfers dream of, to be in contention as those famous roars reverberate around the pines.

For the lucky few still in with a chance, the pressure mounts. But what looms is one of the hardest and most iconic stretches of holes in golf. Amen Corner.

The term, coined by sports writer Herbert Warren Wind in 1958, signifies Augusta's 11th, 12th and the tee shot on 13. It's that amphitheatre of azaleas, whirling winds, Rae's Creek and devilish dramas at the lowest part of the course. Many are inclined to add the 10th to the collective, given its status as statistically the toughest hole.

"Having that opportunity to be in the thick of it and to feel that excitement, to feel that pressure, to grace Amen Corner knowing that you need birdies, and trying to win a Green Jacket, that is the greatest thrill a golfer can possibly experience," said Phil Mickelson.

With the Green Jacket up for grabs, let's see what the players face.

The 10th takes first-timers at Augusta by surprise. It plunges away, with a huge drop in height between the tee and the green. Players try to hit a severe hook (or fade, for left-handers) around the corner to chop off the distance remaining and try to secure a flattish lie for the second shot.

But beware. Remember what happened to Rory McIlroy in the final round in 2011. He overdid it, caught the overhanging trees and ended among the cabins. Meltdown followed.

"If you don't hit the ball left you're in trouble," said Gary Player. "Bubba Watson went right in the play-off last year, and OK he hit a miracle shot, but Louis Oosthuizen also went right and needed a four iron to the green. If you hook it, you've got an eight iron."

"The 10th tee shot is something I specifically work on, trying to hit a three wood and moving it more than I would. The reward is getting right down on the flat," said Graeme McDowell.

Landmark moment: The right-to-left sloping green is deceptive, too. New Zealand amateur Danny Lee six-putted here for a nine in 2009.

The start of Amen Corner proper, and a hole that has been changed significantly over the years. The tee was moved back 30 yards in 2002 and another 15 in 2006. Dozens of trees have been added to the right side of the fairway over the last decade, directing drives more to the left.

"I remember playing with the likes of Seve and Raymond Floyd and they always said to just hit it over where the gallery is, that's the angle you want to come from," said Tiger Woods. "Well, you can't get over there anymore, the hole is playing to the left.

"It's a much different hole. A good drive will leave me somewhere between an 8 iron to a 5 iron in there, whereas before it was a driver and a sand wedge, pitching wedge."

At the first ever Masters in 1934, Augusta's front nine was the back nine. The layout was reversed a year later. Horton Smith won the 1934 Masters with a 20-foot birdie putt at Yellow Jasmine - then the 17th hole, now the 8th. The American won the event again two years later, making him the only person ever to have won on both course layouts.

Coming over the hill as you walk down from the tee, you see Amen Corner spread out before you. The vast crowds on the grass, the grandstand, the 11th green and its pond to the left, the 12th tee and the 12th green beyond Rae's to the right.

"When I first played 11, I couldn't believe how expansive [it was]," said Woods. "TV doesn't do it justice how expansive it is from that whole open area on 12 and 13. And certainly, the commentators try and give it justice, but I don't think they really can, of how much it swirls."

The second to 11 needs to be pin-point. Left is wet, right is tight, leaving a tricky chip onto a fast, sloping green with water lurking beyond.

"By the time you get to the top of 11 you're looking at the flags on the 11th green and the 12th green, trying to judge the wind," said McDowell.

Landmark moment: The 11th will long be remembered for Larry Mize's chip-in to win the 1987 play-off.

The short 12th, just a few strides to the right of the 11th, is one of the most revered holes in golf. Backed by rows and rows of patrons in their Augusta green chairs with a grandstand behind, it is the quintessential Masters experience. In the final round, it is packed. The tension is palpable.

The 12th is famous for the fickle winds that dance and dart about above the trees, making club selection tricky. Stories are legion of players choosing wrong, or the wind changing as they hit, and either coming up short and finding Rae's Creek (or the front bunker if you are lucky), or going long into the back bunkers or azalea beds.

"I've played it so many times where I've played 11, 12 and 13 either all downwind or all into the wind. How does that work? You know, you get down there and Bobby Jones has turned this fan on and it swirls."

Ben Crenshaw's veteran caddie Carl Jackson, in his 52nd Masters, says: "You've got to think about the wind direction, whether it's a sunny day, is it consistent, whether you got to lean on something? It will fool you, because the wind circles in those trees. The caddie's got to have some idea of the type of shot his player is thinking about hitting and make suggestions from that. Sometimes he might just want to hit a little fade or play it down a little bit.

"It can go from a nine iron to a four iron. Some strong guys will even hit a pitching wedge these days."

Landmark moment: Fred Couples came to the 12th with the lead in 1992 but misjudged his approach to Sunday's traditional right-side pin position and saw his ball trickle agonisingly towards the water. Amazingly, it stayed up and Couples salvaged par before beating Floyd by two.

Still on the far side of Rae's Creek, you walk from the 12th green up to the 13th tee, which is back up in the woods beside the neighbouring Augusta Country Club's ninth hole, just over the fence. This is the furthest you've been from the crowd all day. A chance to take a deep breath and hear your heart beating. Technically part of Amen Corner, the 13th offers the chance of an eagle if you get it right, but there are dangers on all sides.

Most opt for a draw (or fade for a left-hander), but some just nibble at the corner with a straighter one. Left is trees and a creek, too straight and you end up in the pine straw. Not that it bothered Phil Mickelson when he conjured his miracle shot in 2010.

The second shot throws up a dilemma - gamble and try to fly the ball over the tributary of Rae's Creek and onto the green to set up a possible eagle, or lay-up and hope your pitching is good enough to grab a birdie. It could define your tournament.

Mickelson says it is his favourite hole.

"I just think that the shot value that's required there, the lie that is challenging, takes creativity. It's hard to understand, especially on TV, but even in person, how much above your feet that ball is for a right handed player and how much below it is for a left handed player. Looks simple enough, big greens, just knock it on; it's a tough shot."

Landmark moment: Plenty of hopes have faded in the creek, or with a tame par on the vast, multi-layered green when others are forging ahead with birdies or eagles. Just ask Japan's Tommy Nakajima. He took a 13 here in 1978.

Whether you are still in contention to win the Masters depends on how you have fared at the start of the back nine.

"Those holes are monsters," said Player. "Amen Corner - what an appropriate name."