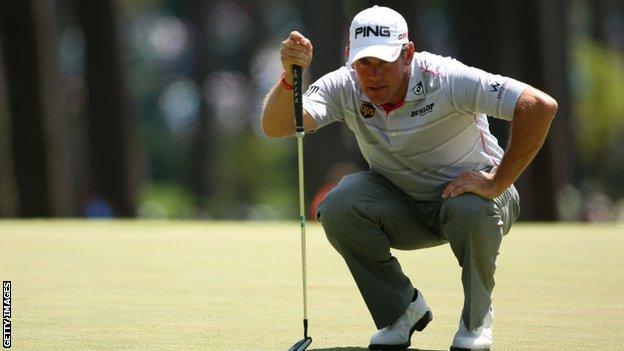 Lee Westwood said fast greens made low scoring difficult on the third day of the Masters but still held hope of breaking his major duck at Augusta.

"It felt like very hard work. It was tricky out there," said the Englishman, who is five strokes behind leaders Brandt Snedeker and Angel Cabrera.

"The greens were significantly firmer. I could've gone under par. I missed birdies - the reason I made 73 not 70."

"I still have a good chance. It's easy to pick up shots round this course."

Westwood, 39, is the leading Briton after shooting a 73 which left him on two under - five shots behind the joint leaders.

Compatriot Justin Rose was also within touching distance of the leaders, but a round of 75 saw him drop down to level par, the same score as Luke Donald who, like Westwood, also found it hard to judge the greens.

"I felt like pulling my hair out. I felt like I could play solid golf today," the 35-year-old Hertfordshire player told BBC Sport.

"I ended up making bogeys with shots I tried to hit a foot short. It's playing tricky out there.

"The wind is 5 or 6 mph, but you don't know where it is. The greens are a lot firmer. The ball is not holding as well as it did on the first two days."

Two-time major winner Rory McIlroy began the Saturday on two under, but had a day to forget when he twice found the water, making a triple bogey on 11 and then a double on 15 to finish with a 79.

This is not going to be McIlroy's year at the Masters. His reaction when he finally picked the ball out of the cup on 15 was to hurl it into the middle of the pond at the 17th

"I made a couple of bad errors on the front nine and was still OK," the 23-year-old Northern Ireland player said.

"I hit a drive to the right on 11 and the wind switched on me. I took seven there and never really recovered. The same thing happened on 15. They are very small margins, but you pay a big price for them."

Former Open champion Paul Lawrie, like McIlroy, is on five over for the championship. He judged his own third-round performance as "magnificent" but said that small errors of judgement proved costly on the Augusta course.

"I played beautiful the first 13 holes, could have been anything, five or six under," said the Scot.

"It's just a strain. It's a joke. I played magnificent out there and I shoot three over. It's just unbelievable.

"But that course does that. You can be a yard off and you're making double bogey out there. You have to have your wits about you and try and just play as best as possible."

"I must have missed seven or eight putts inside 12 feet for birdie and you just can't do that, it just catches up with you."