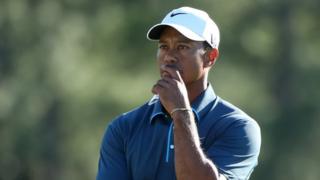 'The golfing Gods are displeased with Tiger'

Tiger Woods shoots 70 on day three of the Masters to be four shots off the lead going into the final round, despite an amazing miss at the eighth hole which led BBC commentator Peter Alliss to claim that "the golfing Gods are displeased with him."

The world number one was penalised two shots following an incident on day two, but recovered sufficiently to remain in contention.

Despite being four shots behind leaders Brandt Snedeker and Angel Cabrera, Woods says "anything can happen" on the final day.