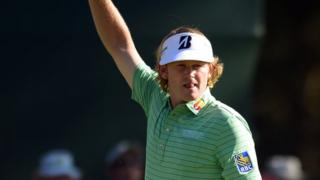 American Bradt Snedeker shares the lead on seven under par after the third round of the Masters.

The 32 year old from Tennessee is tied with 2009 champion Angel Cabrera after going round in 69.

Having covered the front nine in level par, Snedeker picked up three birdies on the back nine to leave himself in a strong position for the final round.