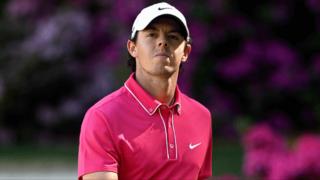 A downbeat Rory McIlroy talks about his third round collapse at the Masters at Augusta, which saw him drop from three under par to five over.

McIlroy, from Northern Ireland, was one under for his round after six holes but took seven at both the 11th and 15th holes after finding the water on each occasion.

"It's very disappointing - the margins on this course are very small and you can pay a big penalty for your mistakes," said the world number two.