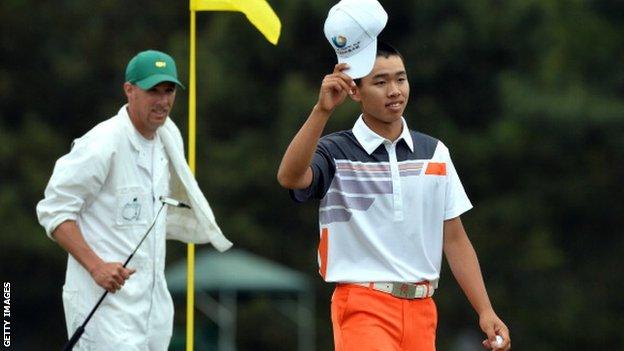 Chinese teenager Guan Tianlang said he had a great week after a record-breaking four days at Augusta.

Guan, at 14 the youngest player in Masters history, carded a three-over 75 to finish 12 over on his debut.

The schoolboy had a memorable tournament after becoming the youngest golfer to make the cut at a major despite being penalised for slow play.

Guan said: "It was a great week. I learned a lot. I enjoyed it and had fun. Still a lot of things to improve."

He joins the likes of Tiger Woods, Phil Mickelson and Sergio Garcia in winning the Silver Cup, awarded to the best-placed amateur in the field.

"I thought Tianlang Guan would score 81, 82 but I wouldn't have been surprised by a 90 because this course is such a monster. The greatest thing I have seen in golf was Tiger Woods winning a Grand Slam at 24, but Guan's performance is the second best I have seen. And he did it hitting woods! It is just incredible, if I had been in his position when I was 14 I would have been in tears."

Guan captured the hearts of many for his poise and maturity on what was his first appearance at a major and received a rousing reception on Sunday from patrons on the 18th.

On the last day, Guan bogeyed the first, fifth and sixth and 11th before finally picking up shots with birdies at the par-five 13th and the 16th. He then bogeyed the 17th before ending a remarkable tournament with a par on the last.

"It's actually the most difficult course in the world," he said of Augusta National.

"I feel a little bit tired. There are still a lot of things to improve. My short game's good, but I still need to be better. My driver probably needs to be a little longer.''