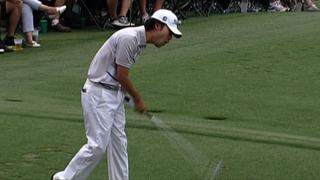 Kevin Na runs up a 10 at the par-three 12th hole in the final round of the Masters, after taking four attempts to clear the water in front of the green.

The American carded a nine-over-par 81 for his round to finish at 13 over for the tournament.

Na has the record for the second-highest ever score on an individual hole on the PGA Tour, racking up 16 shots at a par four in 2011.