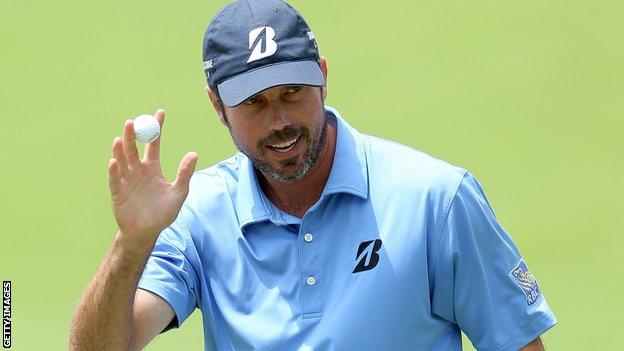 Overnight leader Kuchar, 34, shot a four-under-par final round of 68 for an overall score of 12 under.

English pair Brian Davis and Justin Rose were the top Europeans, earning a share of eighth place on four under.

World number one Tiger Woods finished at eight over, with Northern Ireland's Rory McIlroy struggling at six over.

Kuchar, who topped the PGA money list in 2010, said: "This is some amazing feeling. This stuff never gets old. The real treat is my wife and my kids running out here, it is a special feeling.

"It got scary at the end though."

Leading by two going into the final round, Kuchar - who earlier this year won the WGC Match Play title in Arizona - was never caught in the Ohio event hosted by Jack Nicklaus.

He birdied all four of the par-fives to remain in control and confirmed his win by sinking a 20-foot birdie putt at the par-four last.

Chappell, seeking his first PGA Tour victory, birdied four of the last six holes for a bogey-free 68 and outright second place while five-time champion Woods ended a forgettable week with a level-par 72, finishing a distant 20 strokes off the pace.

McIlroy, who only narrowly made the cut after a torrid opening 78, also carded a final-round 72 for a six-over-par total.