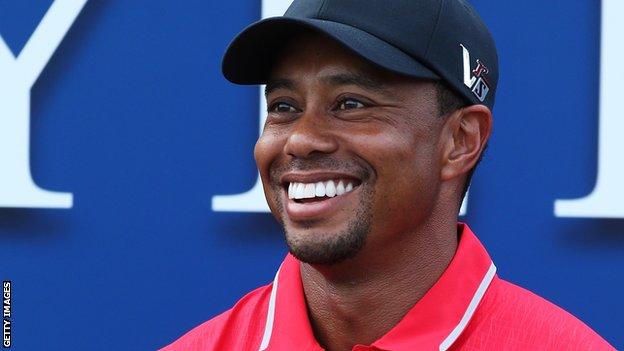 Tiger Woods has returned to the top of Forbes magazine's annual list of the 100 highest-paid sports personalities.

World number one ranked golfer Woods, 37, was third in the previous list, ending a 12-year stint at the summit.

The study showed that Beckham, while famed as a global brand, was only the joint-fourth highest earner from endorsement deals.

The 38-year-old, who announced his retirement from playing last month after winning the Ligue 1 title with Paris St-Germain, increased his overall earnings to $47.2m (£30.6m).

But the $42m (£27.3m) he made from sponsorship contracts left him behind Woods, Federer and golfer Phil Mickelson, and alongside basketball player LeBron James.

Boxer Floyd Mayweather topped the money list last year, but dropped to 14th with earnings of $34m (£22.1m) from his fight with Robert Guerrero in May after taking $85m (£54.3m) when he fought twice during Forbes's last 12-month measurement period.

Despite the Forbes list coinciding with London 2012, Jamaican sprinter Usain Bolt was the only track athlete to feature. The six-time Olympic champion, world record holder at both 100m and 200m, shot up the rankings from 63rd to 40th after taking in $24.2m (£15.8m).

This year, the number of women ranked in the top 100 rose to three as Serena Williams joined fellow tennis players Maria Sharapova and Li Na.

French Open champion Sharapova rose from 26th to 22nd in the overall rankings, as her earnings increased by more than $1m to $29m (£18.8m).