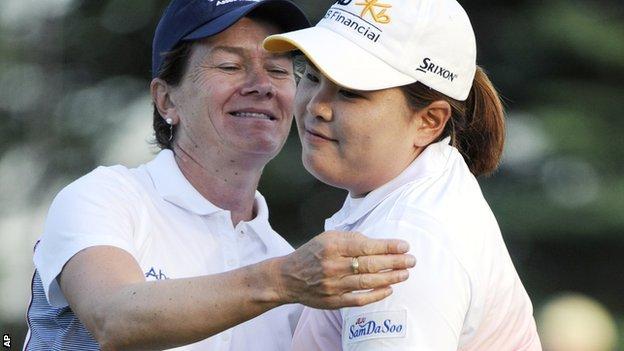 Scotland's Catriona Matthew was beaten by South Korea's Inbee Park in a sudden-death play-off at the LPGA Championship in New York.

Matthew, 43, the 2009 Open winner, carded four birdies in a blemish free final round at Locust Hill, Pittsford, to force the play-off.

But it was Park, 24, who took a third major title at the third extra hole.

"Obviously it's pretty disappointing but overall it was a pretty good week," said Matthew.

The entire third and fourth rounds were played on Sunday after Thursday's opening round was wiped out by heavy rains and lightning.

Park took a one-shot lead over 36-hole leader Morgan Pressel, of the United States, into the final round and led by as many as three strokes before losing her way off the tee en route to a three-over-par round of 75.

Matthew made up seven shots on Park in the final round, posting a bogey-free, four-under 68 to take a five-under-par total into the clubhouse.

It was enough to force a play-off after the South Korean made three bogeys over the last five holes to tie on 283.

Tied for third place on four under were Pressel and Norway's Suzann Pettersen, who fired a seven-under 65 in the final round - the lowest of the tournament.

"When I started the last round I probably didn't realise I could win," said Matthew. "So to play well and get into the play-offs was obviously pretty good.

"She's not the kind of player you'd expect to fall back."

It was Park's second major title of the season following her triumph in the Kraft Nabisco Championship and underlined her status as the world number one.

"It was one of the toughest days out there," she said after sinking an 18-foot birdie putt at the par-four 18th to beat Matthew after they both parred the first two holes of sudden death.

"I didn't hit many fairways out there and I was scrambling really well out there," said Park. "I think I was actually really lucky to get in the play-off."