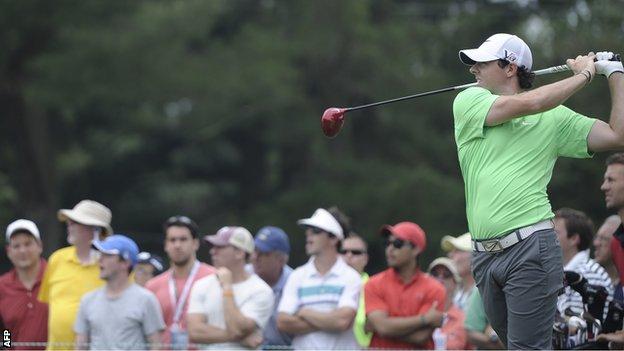 Rory McIlroy carded a quadruple-bogey on a his way to a closing six-over-par 76 in the US Open at Merion.

The 2011 champion from Holywood took eight shots on the par-four 11th while he also had a double-bogey at the fifth on a tough Merion course.

McIlroy also posted two bogeys and two birdies, at the second and seventh, to finish the tournament on 14 over.

Dubliner Padraig Harrington fared better in the final round with a 72 leaving him on 11 over.

After his final round, McIlroy said he thought he had "played ok" but had been "unlucky with some of his tee shots".

"I'll take the positives from the week and now I'm looking forward to the Irish Open," said the world number two.

Justin Rose clinched his maiden major title to become the first Englishman for 43 years to win the US Open.

The 32-year-old won by two shots from now six-time runner-up Phil Mickelson and Jason Day on a gripping final day.

Rose, also the first Englishman to win a major since Nick Faldo in 1996, fired a level-par 70 to end one over as overnight leader Mickelson carded 74.

Australian Day took 71 as England's Luke Donald (75) collapsed to six over on the treacherous Merion course.