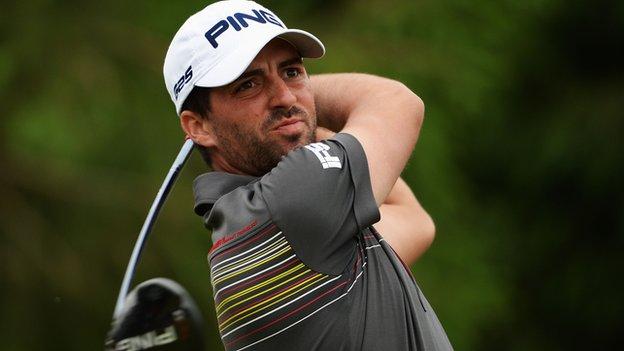 Yorkshire golfer John Parry missed out on a place at this year's Open after a cruel twist of fate at Sunningdale.

Just eight days after finishing tied for 28th in his first major, the US Open at Merion, Parry went into the 36-hole European final qualifying event hoping to make it to Muirfield.

But he missed out by two shots, after a hole-in-one that never was at the par-three fifth.

It landed in the hole, only to bounce out and end 20 feet away.

"It actually pitched in the hole. But, instead of an ace I only made par," said Parry.

Since coming through qualifying for the US Open at Walton Heath last month, it has been a dream few weeks for the 26-year-old from Knaresborough.

He followed up his highly creditable major debut at Merion by finishing 10th at the BMW International Open at Munich last Sunday, but then had to dash back to the UK.

After a delayed flight back from Munich to Gatwick on Sunday night, Parry managed just four hours' sleep before teeing off at Sunningdale - but he refused to use fatigue as an excuse.

"In terms of the golf I played at Sunningdale, it was probably better in parts than my performance in Munich," said Parry, who finished on level par for the two rounds.

"One problem was that, after dropping a couple of early shots during my first round on the Old Course, I was left playing catch-up.

"Late birdies allowed me to sign for a 72, but that still left me six shots off the pace."

He continued: "I started to bridge that gap with some early birdies on the New Course in the second round and then came that stroke of bad luck.

"Thinking the scoring would be much lower I then tried to play attacking golf and, as a result, mistakes crept into my game.

"I still carded a 67, but level par overall was still two shots outside the line for earning a place to play at Muirfield."

Harrogate-born Parry is still clearly heading back in the right direction, however, as he bids to establish himself on tour.

A former Walker Cup team-mate of Rory McIlroy, Parry took to the European Tour card like a duck to water when he first earned his card in 2010, winning the Vivendi Cup and banking over £200,000 at the Alfred Dunhill Links Championship as he finished 51st in the Race To Dubai.

He lost his card after a disappointing 2011, only to regain it by winning European Tour School out in Spain last November.

He then made the cut in only three of this year's first 10 tour events, but finishing 14th in the Madeira Open, followed by his performances at Merion and in Munich have turned it all round for him.