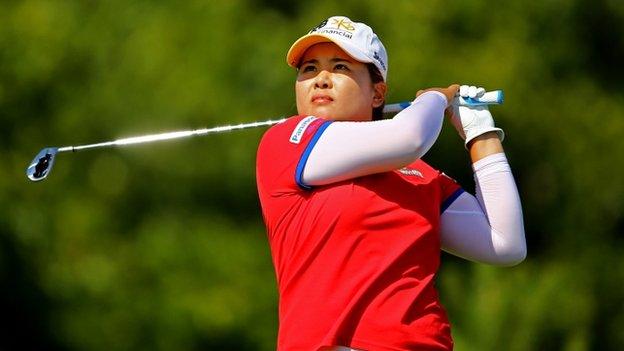 South Korea's Inbee Park moved closer to winning her third major title of the year after a solid third round at the US Women's Open in New York.

The 24-year-old shot a one-under round of 71 to finish on 10 under - four clear of compatriot In-Kyung Kim.

England's Jodi Ewart Shadoff is a further three shots back and on course for her best LPGA Tour performance.

Meanwhile, American Jessica Korda had an eventful day, replacing her caddie midway through her round.

The 20-year-old, who is the daughter of Czech former tennis player Petr Korda, dispensed with the services of Jason Gilroyed after a poor front nine.

After Korda got to the turn in 40 with three bogeys and a double bogey, she replaced Gilroyed with her boyfriend Johnny DelPrete, who is himself a professional golfer.

The change appeared to work as Korda went one under through the back nine for a four-over round of 76, which took her to one over overall and a tie for sixth.

Korda said: "We had a couple of disagreements here and there and I wasn't in the right state of mind. I knew I needed to switch and just have a little bit more fun out there.

"It was tough for me, because I care about Jason a lot. He is a great guy. That's just how it happens sometimes in life."

Leader Park, who has already won the Kraft Nabisco Championship and the LPGA Championship this year, approached the turn on one under for her round but a run of three consecutive bogeys threatened to send her back into the pack. However, she rediscovered her form to pick up shots at the 14th, 15th and 18th for the only under-par round of the day.

"I think I played very good today, especially after the three bogeys," said the 24-year-old.

"I came back very strong. I probably putted the best out of all the three days. It was tough out there."