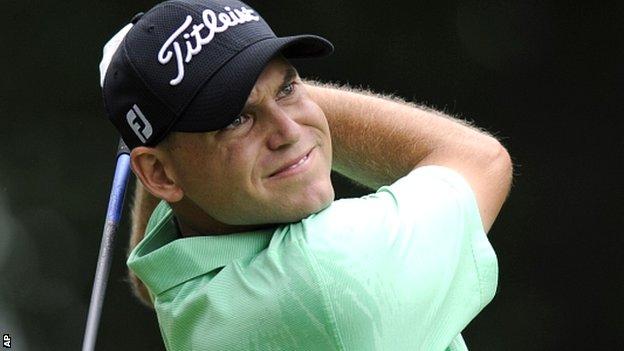 American Bill Haas won for the first time since February 2012 with a three-stroke victory at the AT&T National.

The 31-year-old, who had seven previous top-10 finishes in 2013, carded six birdies in a 66 to finish on 12 under at the Congressional Country Club.

It was a fifth career victory for Haas, one of four overnight leaders.

Roberto Castro, who led or shared the lead after each of the first three days, was second with world number eight Brandt Snedeker in joint eighth.

Castro closed with a 69, while fellow American Snedeker shot a final round of 71.

South Korean rookie Lee Dong-Hwan made nine birdies in a 64 for his best finish in 18 PGA Tour starts, a share of third with American Jason Kokrak.

Stewart Cink, the 2009 Open champion, was a shot further adrift while US prodigy Jordan Spieth, the 19-year-old seeking to become the youngest winner on the tour since 1931, shot a 69 to finish sixth.

At one point on the final day there were five players tied for the lead at seven under, with three others only one stroke adrift, but Haas moved clear with three birdies in a row from the eighth.

Haas claimed the coveted $10m FedEx Cup in 2011 and his record of winning at least one PGA Tour event in each of the last four years is matched only by Phil Mickelson, Dustin Johnson and Justin Rose.