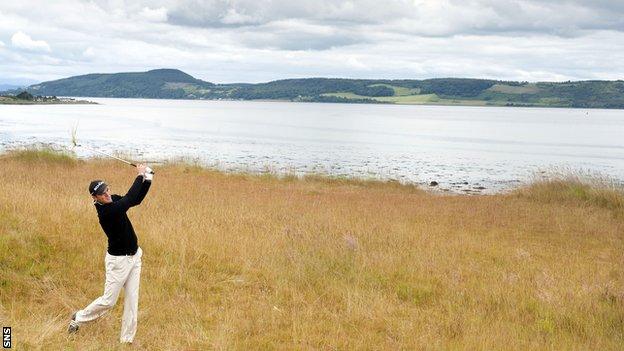 Castle Stuart is aiming for third time lucky when the Scottish Open gets under way on Thursday.

With the event moving on to Royal Aberdeen next year, the Inverness course needs to put on a good show if it is to remain in contention as a future host.

Graeme McDowell ruffled a few feathers when he suggested the tournament "has lost its identity and its prestige".

But, with Ernie Els and Darren Clarke in the field, it means that the last two Open champions will be teeing up in the Highlands.

There will be five other major winners on show, including Phil Mickelson and local favourites Paul Lawrie and Sandy Lyle.

After 15 years at the gloriously telegenic Loch Lomond Golf Club, the event shifted north to a links venue in 2011 with the promise of offering better preparation for the Open.

However, most of golf's A-list still prefer to ready themselves for the oldest major in private, honing their bump and run shots and crosswind strategies away from prying eyes.

Freakish rain, even for a Scottish summer, blighted Castle Stuart's bow, with the event reduced to 54 holes, although we did get a stellar winner in Luke Donald.

Last year, the showers were less fierce - there was even some sunshine - and Jeev Milkha Singh was the last man standing after a play-off.

But the Indian's triumph was something of an anti-climax for the crowd as Glasgow's Marc Warren had thrown away a three-shot lead over his final four holes.

McDowell, winner of the title in 2008, was one of those washed away three years ago and he has not been back since, while Donald is giving it a miss this time.

The Northern Irishman has been critical of the course but is more unhappy with the timing and prize money as Europe struggles to compete with the riches on offer on the other side of the Atlantic and the Middle East.

Yet, the Scottish Open regularly attracts big galleries, with close to 60,000 fans coming through the gates last year.

And the £3m in cash prizes dwarves most of the other European purses.

Els questioned whether to make the trip to the Highlands but the big South African will be gunning for his third Scottish Open title, having topped the leaderboard in 2000 and 2003.

The 43-year-old, who won the Claret Jug the last time the Open was held at Muirfield in 2002 and again last year at Royal Lytham and St Annes, had originally indicated that he would take three weeks off after winning the BMW International Open.

It must have been music to tournament organisers ears when Els announced his late entry.

"Playing the Scottish Open is not only the perfect preparation for the Open, it's also a tremendous tournament in its own right," said Els.

"I feel I might need a little bit of a run before the Open. You can only practice that much, you have to hit shots under pressure.

"I have very fond memories of my two wins in the Scottish Open, and if I can win it a third time, it would be the perfect platform for my defence of the Open.

"The Scottish galleries are very knowledgeable, they really know their golf, so if we can get some decent weather we should be in for another great week."

Mickelson will be another big draw and the four-time major winner is a regular patron, playing in eight of the last 10 Scottish Opens, although the nearest he has come to winning was losing out in a play-off in 2007.

The crowds will also be able to cheer on a healthy contingent of home players, with Lawrie, Lyle, Colin Montgomerie and Martin Laird among 18 Scots in the field.

With its wide open spaces and wispy rough, Castle Stuart will not have anything like the bite Muirfield has in store next week.

But, following a spell of good weather, we should get firm fairways and slick greens, while it has to be hoped that the Moray Firth can whip up a testing breeze.

If the Open winner comes from the ranks of Scottish Open competitors for the third time in a row, then maybe those absent A-listers will need to rethink their preparations.