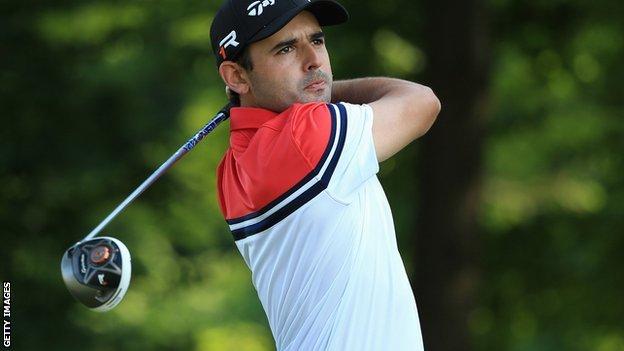 Paraguay's Fabrizio Zanotti holds a one-stroke lead at the halfway point of the French Open after firing two rounds of 68 to be six under par in Paris.

Fog forced a one-hour delay to round two, but overnight leader Anders Hansen fell away dramatically as he followed his first-round 66 with a 78.

Northern Ireland's Graeme McDowell is in a group of four on four under.

Bjorn, starting at the 10th hole, moved to the head of the field early on with three birdies in his first five holes and held a two-stroke lead with two holes to play, but bogeyed the last to to move back level with Hansen - who had yet to begin his second round - on five under.

Hansen's nightmare round included seven bogeys and a double bogey at the second.

That left him level with Ryder Cup duo Ian Poulter and Luke Donald in a tie for 44th place, a shot ahead of American Matt Kuchar.

McDowell, Bjorn's playing partner, had missed the cut in five of his last six strokeplay events, but a second successive round of 69 kept the former US Open champion in contention.

"I'm playing this golf course the way it's supposed to be played - fairways and greens. Once you start hitting it off line it will punish you," said McDowell.

"I just have not got the putter revved up but I am well in touch and right where I need to be."