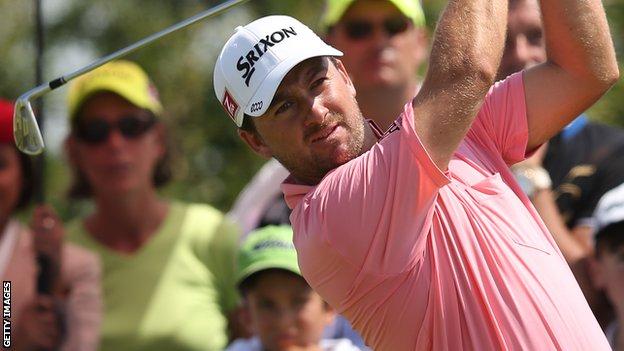 Graeme McDowell clinched his third win of 2013 as he shot a final round of 67 to finish four ahead of South African Richard Sterne at the French Open.

McDowell and Sterne battled for most of the last round but the Northern Irishman was stronger over the closing holes as the South African faded.

The victory earned McDowell more than £430,000 and moved him into second place in the Race to Dubai standings.

McDowell won the Heritage event on the PGA Tour in April and followed that with victory at the World Match Play Championship in Bulgaria a month later.

However, he went into the French Open having missed the cut in five of his last six stroke-play events, including the US Open and last week's Irish Open.

The 2010 US Open champion moved ahead on Sunday with an early birdie but Sterne responded with a birdie of his own at the third and then took the lead after McDowell dropped a stroke at the seventh.

However, McDowell drew level after picking up another stroke at the 10th and he moved ahead at the 12th after Sterne took five after missing the fairway.

McDowell extended his lead after Sterne bogeyed the short 16th with the Northern Irishman's short putt for par falling in off the left edge after it had appeared set to stay out.

The Ryder Cup star was suddenly four ahead when a magnificent approach at the tough par-four 17th yielded another birdie, with Sterne dropping another shot after a missed short putt.

McDowell's victory was hailed on the 18th green by his parents Marian and Kenny, who had travelled to Paris to watch their son in action.

The 33-year-old described his victory at the tough 2018 Ryder Cup venue as "special".

"It's been a funny year because my game hasn't felt far away most weeks," added McDowell.

"But I've missed a lot of cuts and missing cuts hurts. That has certainly motivated me a lot these last few weeks."

England's Ian Poulter, a 12-time winner on the European Tour, finished on two over after a final round of 73 with Luke Donald on six over after carding a 75.

After McDowell, Gareth Maybin was the the next best Northern Irish player as he shared 11th after hitting an impressive 68 on Sunday.

Gareth Shaw, after finishing in a share of fifth in his first ever European Tour event at last week's Irish Open, was again in the top 20 after a closing 69 left him tied for 15th on level par.

Meath man Damien McGrane finished on one over after a closing 69 with Alan Dunbar on four over after a 71 and Michael Hoey second last of the weekend qualifiers after slumping to a 79.