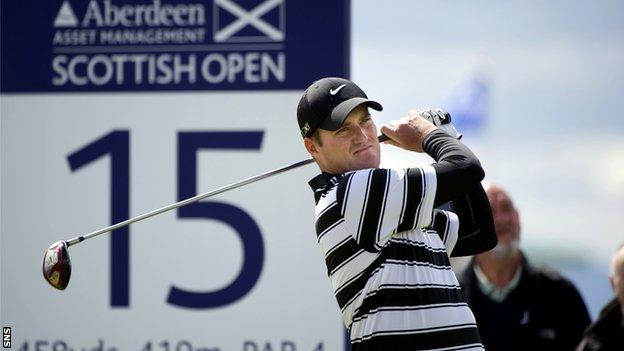 Marc Warren cannot wait for another crack at the Scottish Open despite suffering great disappointment at Castle Stuart last year.

The Glaswegian squandered a three-shot lead over his final four holes and had to settle for third place.

"I just want to continue showing some of the good form I've had over the last 12 months," Warren told BBC Scotland.

"I said at the time that I would take confidence from the way I played and I've done that."

The 32-year-old is currently 17th in the European Tour's Race to Dubai following several good performances this season, most notably a tie for second-spot at the PGA Championship at Wentworth.

With a place at his first Open already secured for Muirfield next week, Warren is now looking forward to warming up on the Inverness links.

"I feel as if I can compete most weeks; things are progressing nicely," he added.

"My game is in good shape and I have been in contention on all different types of golf courses."

Last year, Warren was playing wonderfully until a double-bogey at the 15th resulted in a dramatic change in momentum.

"I was in a great position and it just didn't work out," he recalled.

"It was the most comfortable I've ever been on the golf course. Everything seemed so easy, so under my control.

"I was cruising along and, probably because of that, just slipped into a couple of bad mistakes.

"Over time, the initial disappointment disappears and it's great to be back here again.

"Hopefully, I can play well again and be in contention on Sunday.

The last home winner of the Scottish Open was Colin Montgomerie at Loch Lomond in 1999.

And Stephen Gallacher, just one place behind Warren in the Race to Dubai, would dearly love to pick up his third European Tour success this week.

"I think this is the fifth major for any Scot," he told BBC Scotland.

"It's a great track and a great field.

"If you can't get up for a course like this, with the Scottish fans, then there's something wrong."

Gallacher will not have the added pressure of Open qualifying to contend with, having already secured his place as first reserve following the withdrawal of Jon Daly.

"I knew I had a great chance as first reserve but to be told I was in so early in the week was a great bonus," he explained.

"I can just focus on doing well here now and get on with the job in hand."