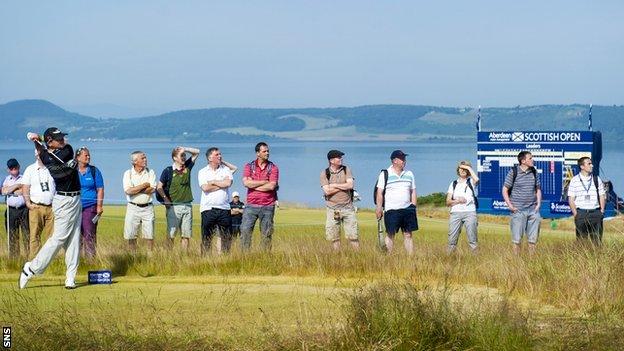 It was not a good morning for sailing on the Moray Firth.

However, for the early starters at the Scottish Open, conditions were near perfect as they teed off beside the glass-calm water.

With only the merest murmur of a breeze, the Castle Stuart course surrendered meekly, with the scoreboard a blaze of red numerals for below-par totals.

"That's what links golf is; if there is no wind, there is no defence," explained Paul Lawrie.

The 1999 Open champion was frustrated to shoot a three-under-par 69, with his putting once again letting the side down.

"The course is in great shape, the greens are lovely," he added.

"I just missed everything I looked at apart from the 18th where I holed one from across the green.

"That's just how my season has gone."

Despite the plethora of early low scores, Lawrie bristled at the oft-repeated suggestion that the course was not testing enough.

"The previous two Open winners have come from the field here, so let's put that to bed," he said.

Scott Henry was one of the first men out as the plaintive cries of fulmars pierced the warm dawn air.

He too posted a three-under-par opening round but was much happier than his fellow Scot.

"It's not easy but certainly you're going to give yourself lots of chances," was the verdict of the 26-year-old from Clydebank.

"There wasn't really any wind to speak of for the first 12 holes. But it's tough to get close because the greens are so firm."

"If you play the hard holes, 7, 15, 17, well, you'll do all right. If you make a bogey you don't have to hit the panic button. Just keep going and you know you're going to make birdies."

Defending champion Jeev Milkha Singh finished his first round with a flourish, chipping in for a score of 67.

"We couldn't ask for better," he enthused. "You know, when the sun is shining, it's God's country and that's rightly said.

"The course is in excellent condition and the weather is a bonus. You've got to make the most out of it, and that's what the guys did out there."

The Indian is missing the premiere of a film based on the life of his father to take part in the Highlands.

Milkha Singh, known as the Flying Sikh, won 400m gold at the 1958 Commonwealth Games and was fourth at the 1960 Olympics.

"It was a very emotional thing for the family because the movie is made about a man who is still living and it's an inspirational movie," he said.

"I wanted to be there for my father but he was nice enough to tell me, being a sportsman himself, 'go out there and defend your title'.

"I've seen it and I think it's going to be one of the best movies of the year. I cried three times."

A northerly wind suddenly picked up around lunchtime, halting the run of low scores, cooling down the fans and leaving those in charge of the course leaderboards idle.

Singh may not have been the only man to have shed a few tears as those afternoon starters curse the luck of the draw.