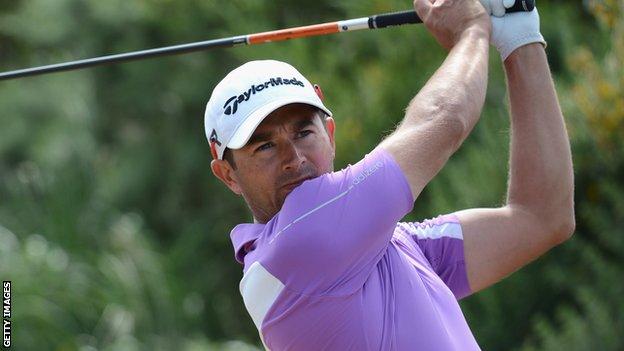 Gareth Maybin and Darren Clarke are five shots behind leader John Parry after firing opening rounds of three-under 69 at the Scottish Open.

On a day of low scoring, Ballyclare player Maybin moved to four under after six but after a back nine stumble, he regrouped with a closing birdie.

Clarke didn't drop a shot in his three-birdie 69 but Michael Hoey is near the tail of the field after a 74.

Shane Lowry is the leading Irishman at Castle Stuart after an opening 66.

Lowry's round left him two behind Englishman Parry who led his compatriot Simon Khan by one shot.

After picking up four shots in his opening six holes, Maybin parred his next six holes but then dropped strokes at the 13th and 17th before his closing birdie.

Maybin finished in a share of 11th place at last week's French Open and qualified for the Open Championship a week earlier.

European Ryder Cup captain Paul McGinley and Damien McGrane are on five under after encouraging rounds of 67.

Clarke produced a steady round as he picked up strokes on the second, 10th and 18th.

Hoey had three birdies in his round but his card included three bogeys and a seven at the par-17 12th.

David Higgins finished on 71 with Simon Thornton on two under after 17 but Peter Lawrie was in third last position after a dismal opening 77.