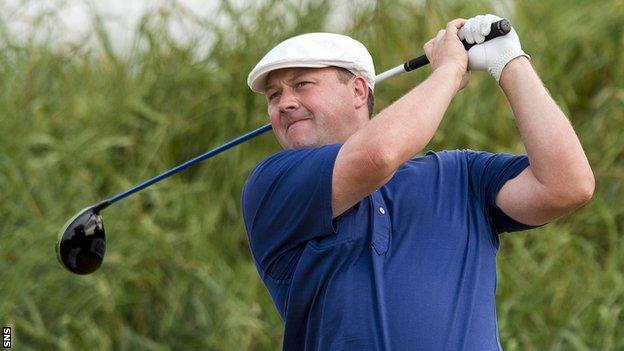 Chris Doak enjoyed his first competitive round at Castle Stuart as he sunk a long putt at the last to grab a share of third place in the Scottish Open.

The 35-year-old from Glasgow also holed out from 50ft for an eagle as he finished day one as the leading home player on six under par.

"It's a great place. I've always loved it up here."

Doak is just two shots behind and is two better off than a trio of compatriots: Stephen Gallacher, Martin Laird and Craig Lee.

Having dropped a shot at his first hole - the 10th - Doak found two birdies before the turn and picked up a further four strokes on the way home.

"I sank a 50-foot uphill putt for an eagle at the second and that's always good for the confidence," he laughed.

Doak has many good memories of the Highlands and revelled in a rare outing on a links course.

"I won my first tournament at Dornoch. I've won at Skibo and Aviemore as well and I met my wife-to-be up here.

"I should just move up!"

Lee, from Stirling, was on course for a blemish-free round until he dropped a shot at the ninth, his final hole, while Laird birdied the last two holes to join a large group on 68.

"It's a good solid start," said the US-based Glaswegian, who, like Doak, went out in the breezy afternoon after .

"I'm pleased to birdie the last two because it might be playing tougher but it's still not overly tough out there."

Gallacher was also satisfied with his opening round but thought his score could have been better in the early sunshine.

"I left a few shots out there but I played lovely so I can't be disappointed with that," he explained.

"You can't win it today but you can lose it.

"The first 12 or 13 holes there were chances all the time but the greens are hard to read.

"And the last five holes were tricky once the wind picked up.

"The par fives, you can have eagles on them, you're comfortable getting on in two on three of the four, so you've really got to take advantage of them."

Paul Lawrie described his round of 69 as "very poor" as he lamented his continued struggles with the putter.

"I was hitting the ball pretty well, I just haven't holed enough putts," he said.

"I'm disappointed to only shoot three under because I played better than that."

And Henry was largely satisfied with his round, which included six birdies.

"I just wasn't hitting it quite close enough," he reflected.

Ramsay was three under after three holes, having knocked in a huge putt for an eagle, but needed a birdie at the last to get back to that score.

David Drysdale and Scott Jamieson sit at two under par on a day that delivered 648 birdies.

Gary Orr, Alistair Forsyth and Marc Warren are a shot further back and veteran double-major winner Sandy Lyle is level par, having been three under with seven holes to play.