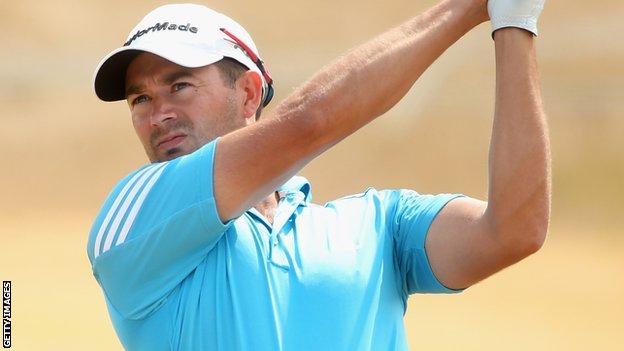 Northern Ireland's Gareth Maybin is just three shots behind leader Henrik Stenson after a superb eight-under-par 64 in Saturday's third round.

The Ballyclare player, who had started the day seven shots off the pace, had an eagle at the par-five fifth plus eight birdies.

Maybin finished the day on 13 under par for the tournament at Castle Stuart.

Phil Mickelson is among a group of four players who are on 14 under - two shots behind Stenson.

Ireland's Damien McGrane is on eight under par with Paul McGinley and Shane Lowry on seven under.

Maybin covered the front nine in 31 thanks to four birdies, an eagle and one bogey and the 64 total equalled the lowest round of the week.

"I have been playing solid golf for the last couple of months and the results are starting to show that," said Maybin.

"When you make the number of putts I did today, you are going to shoot a low score.

"If I can put in a similar performance in the final round I should be in with a shout."