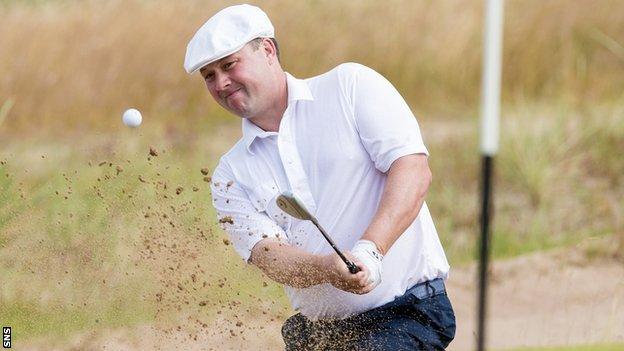 Chris Doak is top of the leaderboard at the halfway stage of the Scottish Open after shooting a second successive 66.

The Scot's six-under-par second round matched that of Peter Uihlein, who is one shot off the lead with Ross Fisher, JB Hansen and Matthew Southgate.

Henrik Stenson is tied for third on 10 under while and Phil Mickelson are two shots further behind.

Ernie Els and Darren Clarke were among those who missed the cut.

Defending champion Jeev Milkha Singh (three under), Miguel Angel Jimenez (level par) and Jose Maria Olazabal (three over) have also missed out on the final two days' play after the cut fell at four under.

Paul Casey and Martin Laird are in a group on seven under with Branden Grace eight under and Francesco Molinari one shot further ahead.

Doak, who recovered from a bogey at the 17th to birdie the last, was delighted to continue his promising start in Inverness.

"I feel it's been coming, the swing's been coming on the mental side so whether it's this week, next week or the week after, it's definitely on the right tracks," he told BBC Radio Scotland.

"I played well last week at the French Open, and that was a tough course. So, I knew it was coming and it's great that it's happened here."

Uihlein picked up six birdies in his front nine and added two more after a double-bogey at the 12th.

"Depending on hole locations and wind, you can really get after it out here," he explained

"You can definitely attack and make some birdies and I've been putting well so it's been nice."

Els, who will defend the Open at Muirfield next week, admitted missing the cut was "not great" but added: "My game is where I want it to be.

"I thought I played quite well today but I had no idea on these greens so I am glad I am leaving to get on some other greens.

"I did not get the run of the course - it felt like it was against me, but I am playing nicely and gave myself a lot of opportunities.

"It's not the first cut I've missed and it won't be the last."