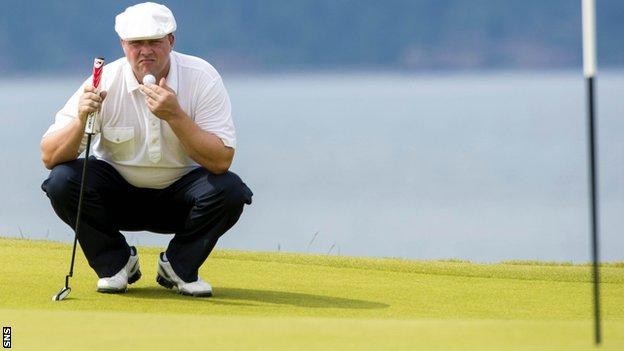 Chris Doak does not seem the nervous type as he laughs and jokes his way through media interviews.

And the Glaswegian has appeared almost nonchalant as he belies his lowly ranking to lead the way after two rounds at the Scottish Open.

Just as he did on Thursday, the 35-year-old rolled in a birdie putt on the last for a round of 66, leaving him 12 under par going into the weekend.

It was a bit busier on either side of the ropes than the world number 341 golfer is used to, with TV crew, photographers and spectators taking an interest in his endeavours on the Castle Stuart links.

And he took it all in his stride.

Having bogeyed his opening hole on Thursday, he negotiated another 33 without a blemish on his scorecard - not bad for someone who had turned up to practice on Tuesday for his first look at the course.

Of course, that will be put to the test over the final two rounds but he is certainly relishing the prospect.

Wearing his trademark flat cap, inspired by AC/DC front man Brian Johnson, he said: "It's great playing in front of a home crowd and hearing all the different accents.

"I hope more spectators come out and really get the energy going."

Working with legendary coach Bob Torrance has improved Doak's game but his best finish this year has been a tie for 37th at the Nordea Masters in Stockholm.

Torrance is also given credit for improving his outlook, which was given a real boost when Doak came through qualifying at Walton Heath for the US Open - his first taste of a major.

"It was a great experience," he said of his time at Merion, where he failed to make the cut.

"I just wish I had hit the ball better.

"I'm always one for firing at pins, which my caddie tells me off about.

"Being at the US Open taught me more about course management."

Torrance is present this week and may have a thing or two to say about Doak's work off the tee, which was a bit wobbly at times.

Indeed, he needed the assistance of an eagle-eyed spectator to recover his ball at the 9th.

However, the wide open spaces and wispy rough at Castle Stuart are forgiving and all other aspects of Doak's game are in fine fettle.

He produced a delightful bump shot into the 3rd green to set up a birdie and got himself out of a few tricky situations with consistently smart iron play.

And that mental strength was evident when he responded to letting a stroke slip at the 17th with a gain at the last.

Doak revealed that he does not use a sports psychologist but has been consulting with "someone that knows a little more than I do" for the last three years.

With the vastly experienced Torrance in his camp and his breezy disposition, Doak looks well placed to sustain the quest for a home winner.

His fiancée has gone home in the car already, taking the dog with her, so the train journey home on Sunday evening promises to be a lively affair with such an engaging character, especially if there is a large trophy in the luggage rack...