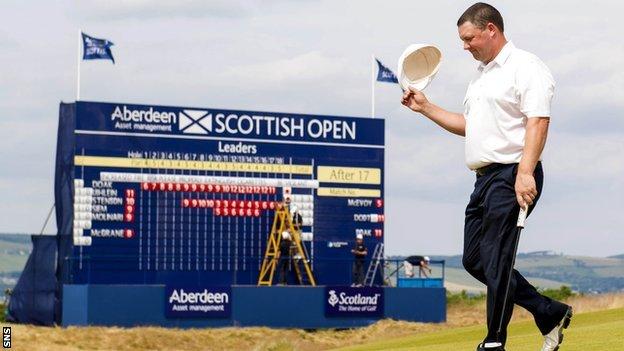 The Scottish Open will return to Castle Stuart as sponsors Aberdeen Asset Management and the Scottish Government have pledged to continue support for the event through to 2017.

With , First Minister Alex Salmond indicated that the Inverness course would next stage it in 2016.

Castle Stuart is currently hosting the event for the third consecutive year.

The tournament will retain the same slot in golf's calendar, the week before the Open, and will continue to be played on links courses.

He added that the likely venues for 2015 and 2017 would be in east central and west central Scotland.

Castle Stuart has attracted just two of the world's top 25 players this week, with many of golf's leading players preparing for the Open away from competitive action.

And, with very little wind at the Moray Firth venue, scoring has been very low - the weekend cut coming at four under par.

This has led to repeated questions about the course not providing a stern enough test ahead of the oldest major.

However, many players, including four-time major winner Phil Mickelson, have been effusive in their praise for the course.

He added: "We have time on our side to look at other courses as prospective venues and it's advantageous that we can also talk to the players, with a view to establishing a rota of high class courses."

Royal Aberdeen, which claims to be the sixth oldest course in the world, hosted the 2005 Senior British Open and the 2011 Walker Cup.

The Scottish Government's financial contribution will continue to come from assets seized from organised crime.