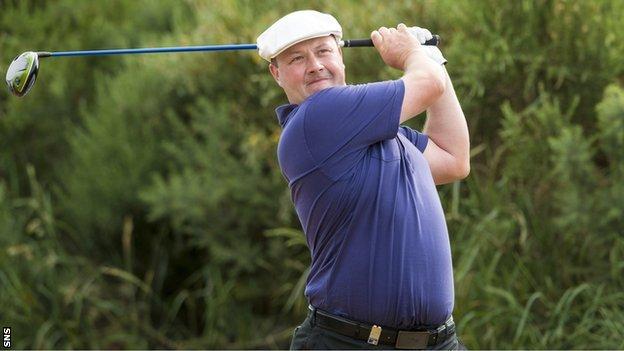 Chris Doak says it is "Hollywood or bust" going in to the final round as the home challenge faltered at the Scottish Open.

dropped down to a share of 12th place following a 73 to leave him on 11 under par.

"It was a tough day tee to green," admitted Doak, who is one shot better off than compatriot Martin Laird.

"I'll be firing at all the pins tomorrow, ignoring what the caddie says."

I'll be firing at all the pins tomorrow, ignoring what the caddie says

, with Phil Mickelson in a group of players two strokes behind.

"I'll need to shoot 10 under to have any chance," said Doak, who was the surprise frontrunner after back-to-back rounds of 66.

The 35-year-old lost a shot at the first hole on day three and slumped to nine under par before rallying with birdies at the 16th and 17th.

"Nerves were not an issue," he said. "I was very relaxed but the swing just wasn't there."

Laird opened his third round with three consecutive birdies but failed to build on that wonderful start, stuttering on the back nine with some errant drives and leaving a string of putts short.

But the Arizona-based Glaswegian has not given up on a tournament he admits he is "desperate" to win.

"This would be number one, it's not even close," he said when asked where a win at Castle Stuart would rank.

"I try to keep that out of my mind - just how much I want to win - and treat it like a normal tournament."

On another warm and largely calm day, albeit with slightly more fiendish pin positions, Laird was frustrated not to be closer to the leaders.

"I love being in the mix," he said. "The way I played today I gave myself a good chance. If only I'd putted better.

"I hit the ball pretty nice and really should be lower.

Laird can take inspiration from his win at the Texas Open in April when he shot a final-day 63 to overhaul a five-stroke deficit and win by two shots.

I feel like this is a course I can win at

"I've won from way behind before and on this course you can get it going on the par fives and the drivable holes," explained the 30-year-old.

"I feel like this is a course I can win at."

The tournament opened with 19 home players in the field, with nine making the cut.

Banchory's Greig Hutcheon matched Laird's 69 to move on to seven under par.

The Tartan Tour table-topper was the first man out and recovered from a shaky start to settle into a nice rhythm, finishing in style with gains at the 17th and 18th.

Gary Orr was the only other Scot to shoot under 70 and also lies at seven under par.

Marc Warren and Scott Henry sit two shots further back after rounds of 72 and 73 respectively.

Paul Lawrie had another miserable day with the putter and dropped one stroke to slip back to three under par, while Stirling's Craig Lee is one shot further back, without a single birdie and two sevens on his card for Saturday's 77.