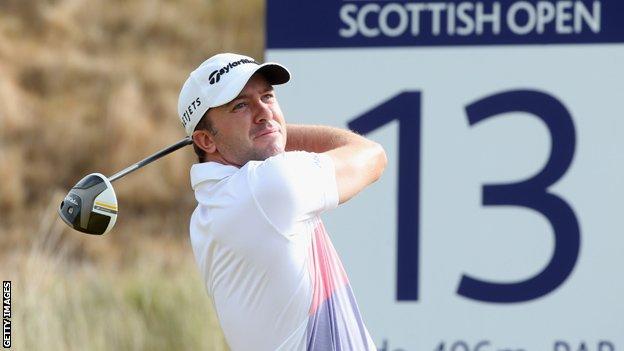 Martin Laird believes his game is in great shape going into the Open after an impressive final round at blustery Castle Stuart in the Scottish Open.

The Glaswegian recovered from a double bogey at the first to shoot Sunday's lowest score, a 68.

That was enough to share fifth place, three shots behind play-off duo Branden Grace and

"Before this round I thought I could win next week and this has given me a lot of confidence," said Laird.

"It was the best I've played all week after a terrible start at the first.

"It was fun to be in the mix at the Scottish Open, one of the tournaments I've dreamed about winning my whole life."

Laird, who was 14 under for the week, has played in four Opens, missing the cut on three occasions.

"My major record wasn't very good until the last couple of years," said the Arizona-based golfer. "I've started to figure them out a little bit.

"I think I've matured. I used to be impatient out on the golf course and you can't do that at majors.

"I don't play very much links golf but it's my favourite. I had so much fun out there.

"There's never a shot where you just get a number, grab a club and hit it.

"You've got to figure it all out and hit different shapes. It takes some getting used to."

Chris Doak, who was the halfway leader after back-to-back rounds of 66 on his first visit to Castle Stuart, finished with a 73.

The 35-year-old from Glasgow takes away prize money of 53,785 euros for his 12th-place finish but was in rueful mood.

"I'm not interested in cheques, it's trophies I want," he said.

"It's been a frustrating couple of days but a top 15 finish playing rubbish on the last day is not too bad.

"I was in contention after two rounds, maybe three but you've got to go low on the last day against these guys."

Doak, who gave away his trademark flat cap to the gathering of grasping kids at the last, was 10 under par for the week.

Marc Warren, third at Castle Stuart last year, nudged up the leaderboard with a 71 to finish six under par.

Greig Hutcheon represented the Tartan Tour with credit, ending the week on five under par.

The 40-year-old from Banchory was at nine under after two early birdies but lost his ball at the par five 6th, with an eight going on his card.

Paul Lawrie and David Drysdale were a shot further back at the close of play, with Scott Henry posting 74 to finish at two under.

Having been seven under par at the halfway stage, Craig Lee was one of six players to end the tournament in blue numerals, adding a 76 to Saturday's 77.

And Gary Orr's Sunday ended prematurely as an apparent back injury saw him lift his ball from the seventh green and take no further part.