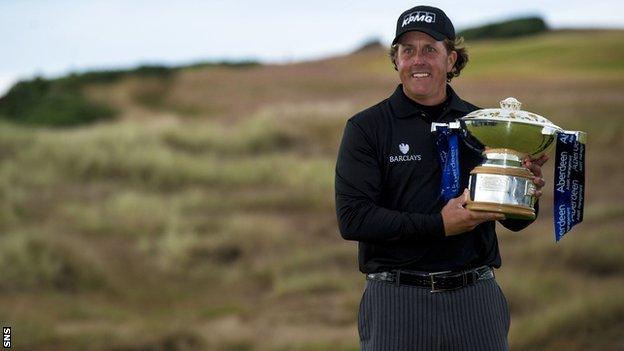 Castle Stuart began the week writhing uncomfortably under lashes of criticism, following two stagings of the Scottish Open that had not quite convinced.

By Sunday, the Inverness links was basking in the afterglow of some glorious Highland sunshine after a job well done.

Grey clouds and blustery squalls had replaced the earlier fine weather by the end of the tournament, but Phil Mickelson's Hollywood smile lit up the gloaming.

And a hugely popular winner was the perfect way to end the good four days the event needed.

With the warm, calm conditions gone, we were denied another Scottish duel in the sun.

The wind was telling as it added some bite to the previously pushover par fives, but never strong enough to unseat the cap of Scotland's First Minister Alex Salmond, who followed the final group with all the enthusiasm of a giddy schoolboy.

The great weather was not just a boon for ice cream vendors, it helped entice an improved crowd of 65,528 through the gates during the tournament.

And the television audience was expanded to the other side of the Atlantic as NBC covered the action from Saturday and Sunday - the first time a regular European Tour event has been broadcast live by a major US network.

Mickelson's triumph must have made that arrangement all the sweeter for American viewers, although there were several entertaining sub-plots to keep all fans engrossed.

Henrik Stenson provided a box-office final-group partner for the four-time major winner, while Grace headlined a cast of little-known players, including JB Hansen, who recovered from a nine at the second hole on Sunday to lead briefly, and Scotland's own Chris Doak, who was in front at the halfway stage.

Martin Laird also found form on the links to finish fifth and lift hopes of a home winner of the Open at Muirfield next week.

Torrential rain and landslides on the course marred Castle Stuart's Scottish Open bow in 2011, with the event shortened to 54 holes.

Last year also ended with a play-off but did not have the same stellar names involved down the home straight.

Much was made of the fact only two of the world's top 25 were present this week and Graeme McDowell put the boot in further by suggesting the event had "lost its prestige".

That 117 players from a field of 156 were under par on day one, with the cut coming at four under, possibly vindicated the oft-repeated assertion the course was not a stern enough test ahead of Open.

However, it did send the last two holders of the Claret Jug home early, with Ernie Els and Darren Clarke falling below the cut line, and only five men managed sub-70 rounds in Sunday's wind.

McDowell has since apologised to the sponsors and indicated he is keen to play next year at Royal Aberdeen, where the NBC cameras will be again.

The Inverness tourist board will have been thrilled that overseas viewers were able to see the spectacular Moray Firth setting in all of its glory.

And they have cause to be further delighted since the Scottish Open will be back soon.

On Saturday, the sponsors and the Scottish Government announced a new commitment to the event through to 2017, with the Highlands to play host again - most likely in 2016.

On this showing, another crack at the Scottish Open is well deserved for Castle Stuart.