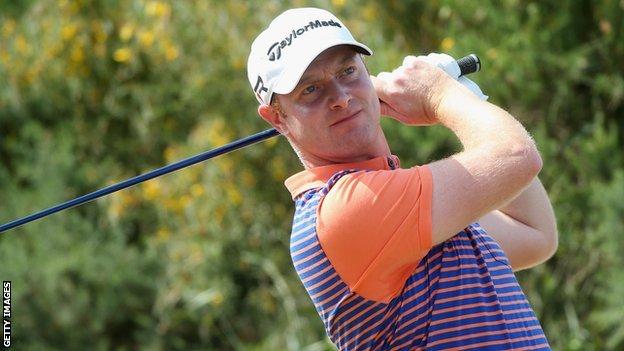 Richard McEvoy has only been to three Open Championships before - two to watch and one to play in, and all at Royal St George's, Sandwich.

But, at 34, the Essex golfer is keen to make up for lost time on Scottish soil this week.

He was a 14-year-old schoolboy when he walked round Royal St George's in 1993, watching Greg Norman beat one of his heroes Nick Faldo by two shots.

And he was a young pro just making his way in the game when he went back to Sandwich as a spectator to see American long-shot Ben Curtis lift the Claret Jug in 2003.

Two years ago, he made it back to Sandwich as a player, shooting a first-round 69 and carding an eagle at the long 14th in round two, before finishing tied for 48th - 17 shots behind the winner Darren Clarke.

"That week really gave me my juice," he told BBC Essex.

"The Open is totally different. When you're growing up as a kid, it's the tournament to play in. Watching Faldo and Norman that week made me realise it's the place where you want to be."

It therefore makes it even more special that McEvoy finds himself in the same 156-man field as three-time former Open champion - and twice a Muirfield winner - Faldo.

"My two inspirations were Faldo and Seve Ballesteros. Both different people entirely. Seve, the Spanish flair player, Faldo the more technical player, the grinder who worked hard at his game. Not that Seve didn't. They were just different in so many ways," he said.

It is a comfort to a comparatively late developer such as McEvoy that Faldo had turned 30, even if only by a day, by the time he won his first Open in 1987.

"You have to keep hoping that the big breakthrough will come," said McEvoy, full of confidence after the second-round 65 at Sunningdale last month in final qualifying, which secured his place at the Honourable Company of Edinburgh Golfers.

"The confidence and swing rhythm gained from making cuts on the European Tour three weeks on the trot has paid dividends.

"After a late, delayed Sunday night flight back from Munich following the BMW International Open, I went straight to Sunningdale to play in the 36-hole qualifier, shot rounds of 71 and 65 and earned one of the nine places that 96 of us were fighting for."

McEvoy is one of two Essex hopefuls to qualify, alongside Chigwell's Oliver Fisher, and cannot wait to start his opening round.

"Muirfield is an incredible place," he added.

"It's one of the big Championship courses I've never played before, but my caddie Scott Walker comes from that area and has worked on the course a lot in the past. And I came and walked the course last Monday on the way up to the Scottish Open.

"And, with the weather like it is and the course in this condition, you have to say to yourself 'why not me?' You have to live in hope."