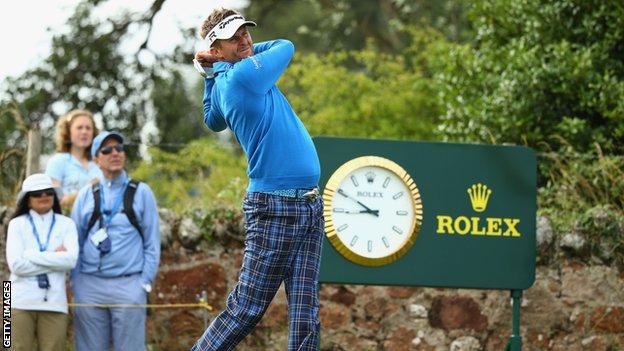 Englishman David Lynn dubbed his golf 'a load of rubbish' after a disappointing start to the 142nd Open Championship.

Playing only his second Open, at the age of 39, the world number 47 began the week at Muirfield with high hopes, only to come crashing down with an eight-over-par 79.

"I managed to birdie the last to break 80," Lynn told BBC Sport.

"But I'm taking nothing out of that. I struggled. It was a load of rubbish."

After starring in the USPGA last August, finishing second to Rory McIlroy at Kiawah Island, Lynn also enjoyed a starring role in April at Augusta, where he was the first-round leader at the Masters.

But, right from the start for the Billinge-born Staffordshire golfer, who now lives in Hull, Muirfield proved a miserable experience.

Having started with a bogey five at the tough 447-yard par four first hole, Lynn dropped another at the fourth and, although he birdied the fifth, four dropped shots went in three holes, starting with a double bogey five at the par-three seventh to take him to the turn in 41.

Two more dropped shots came at 10 and 13, before a double bogey at the par-three 16th was countered by that final-hole birdie.

"I felt like it was hitting it left all day and was just trying to counter that," he added.

"But the other problem was the greens. They were ever so quick. Frightening. Two yards quicker, especially down wind and they caught me out on a few occasions."

Lynn tees off in the second round on Friday at 13:34 BST.