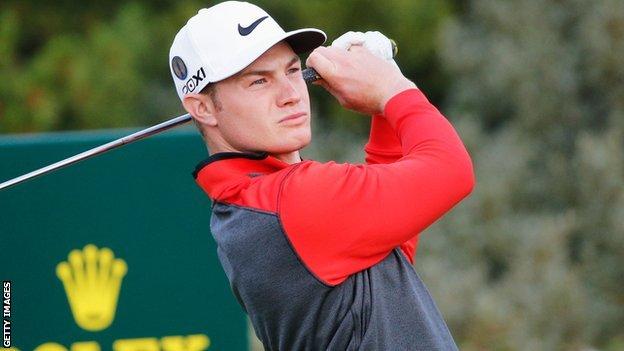 Oliver Fisher made a successful start to his second Open Championship as he carded a one-under 70 at Muirfield.

Fisher missed the cut on his debut as a 20-year-old at Turnberry in 2009, but this year's opening round proved promising for the 300-1 outsider.

In fact, by the end of the day, Fisher stood alone as the leading contender among the 17 Englishmen in the field.

If my long game stays in the shape it has been, I am still well within range of making the cut

By contrast, Essex colleague Richard McEvoy did not have such a good day, carding a two-over 73.

After beginning with a bogey five, the 34-year-old from Shoeburyness then picked up birdies at six and eight to go to one under before dropping one at the eighth to go out on level par.

"I played some beautiful shots and hit 16 greens in regulation," he told BBC Essex.

"But I three-putted three times.

"The greens were basically hard and fast, especially where they were burned brown around the holes.

"They were also often two paced with some light green patches that meant long putts were very difficult to judge. At 17, I had a uphill putt but it just went on gliding over a fast patch as it went past the hole.

"But I made a couple of birdies by hitting the par-five fifth in two and then I sunk a 12-footer after hitting a five iron into the eighth green. And, if my long game stays in the shape it has been, I am still well within range of making the cut."

Fisher, from Chigwell, will resume an hour earlier (11:33 BST), looking to continue where he left off.

He told BBC Radio Essex: "It's great to be part of the experience but I was very pleased with the way I played."

Playing in the first group (at 06:32 BST), after beginning with the first birdie of this year's Open at the second hole - in contrast to playing partner Lloyd Saltman's quadruple bogey eight at the first - Fisher then picked up shots at the third and fifth.

After bogey fives at six and eight, he then got back to three-under with birdies at nine and 11, only to suffer a double at the par-three 13th, followed by another dropped shot at 15, which returned him to level par.

But the 24-year-old former Walker Cup player had one final birdie - at the long 17th - to complete a fine opening round.