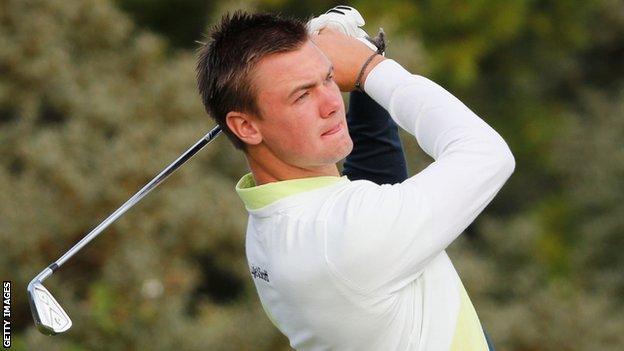 West Country duo Ben Stow and Chris Wood both struggled on the first day of the Open at Muirfield.

Bristol-born Wood got badly caught up in the rough on the first to run up a triple-bogey seven on his way to a four-over 75.

Stow, 20, from Salisbury, was a shot further back after a five-over 76.

The Rushmore amateur's round began well with a birdie at the third to go to one under, but he then dropped four shots in three holes from the seventh.

I had absolutely no idea on the greens. They were really starting to dry out. They were like glass. You saw three or four times how the ball missed the hole and you were facing a putt the same distance coming back

After his double bogey at the ninth, three more shots went on the back nine - at 12, 16 and 18 - with only the consolation of a birdie four at the long 17th.

Wood has an Open record to be proud. He tied for fifth as an amateur at Royal Birkdale in 2008, then finished just one shot shy of a play-off at Turnberry in 2009.

But, after qualifying for the first time in three years, he suffered his second worst round at an Open, birdieing four holes, but dropping a shot at the 10th, as well as suffering two doubles, at 14 and 16.

"The first hole was a bit of a shock to the system," admitted Wood, who was paired with 2001 Open champion David Duval and Austrian Bernd Weisburger.

"I suppose it was a few nerves on the opening day of the Open but it wasn't the best start to my round.

"I couldn't see the bottom of the ball for my third shot and I did well just to move it out.

"But I can't expect too much really after the trouble I've had. I'm just happy to be here after all the issues I've had over the last few months.

"To hope to shoot under par around here was always going to be a tough ask. They've put the pins in some tricky places where there are such subtle breaks.

"I had absolutely no idea on the greens. They were really starting to dry out. They were like glass. You saw three or four times how the ball missed the hole and you were facing a putt the same distance coming back. We were all doing it."