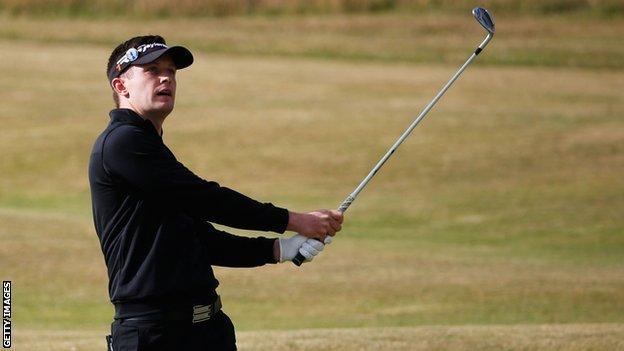 Northumberland amateur Garrick Porteous is in with a chance of making the cut at the 142nd Open Championship after carding a first-round five-over 76.

The 23-year-old from Bamburgh Castle qualified last month when he won the Amateur Championship in foul weather at Royal Cinque Ports.

But, although the weather in Scotland this week has proved a lot kinder, Porteous could not take advantage.

"The greens are hard and fast getting really fiery," he told BBC Sport.

"I got off to a nice start, struggled in the middle, then got it back at the end."

Porteous got off to a decent start when he birdied the third to go into red figures on one under.

But he then suffered a double bogey five at the 226-yard par-three fourth, followed by dropped shots at seven and nine to reach the turn in 39.

Three more shots went in the space of two holes when he ran up a double bogey six at the 11th before bogeying the next too.

After a birdie at 14, he parred in, just missing another birdie opportunity when he briefly outshone playing partners Jason Day and Ryder Cup hero Martin Kaymer at 18.

"I had a few nerves on the first tee, as always," he admitted. "But it's a tremendous atmosphere here.

"Jason and Martin are great guys. It was a pleasure playing with them. And, if there's one thing I took from the experience of playing with them, it's the importance of knowing that, when you get in trouble, you just get it back into play."