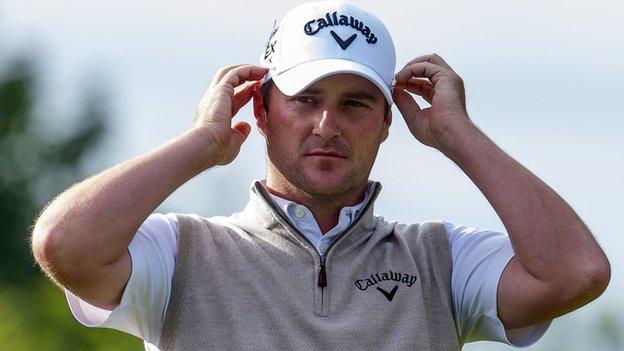 One of 10 Scots in action on day one, Warren carded 15 pars in a steady display.

He said of the treacherous greens: "I had a three-footer for par on 17 and I was struggling to get the putter down on line.

"It was so shiny the putter was sliding."

Warren is competing in his maiden Open Championship, his presence guaranteed by his recent performance in the French Open where he finished tied for 13th place.

He showed no sign of nerves as he hit four pars and a birdie in the first five holes, though he did admit to "extra excitement" when his name was announced on the first tee for his 08:11 BST start.

Overall I am really pleased with one over

However, Warren had a warning for those players with later tee-off times at the sun-baked East Lothian course.

"It's only going to get tougher," he said.

"The greens are so shiny and fast already.

"It's going to be pretty tough for the afternoon guys."

Warren revealed that the American Garrigus likened the speed of the greens to those at Augusta.

And with the forecast sunny for Friday, Warren expects that the Muirfield greenkeepers will be forced to act on the putting surfaces.

The two-time European Tour winner said: "They will have to water the greens to keep them alive, otherwise they will be 'browns'.

"But that [the speed] is what we were expecting. The greens are starting to play as they look.

"On certain ones, you can be a bit more aggressive.

"It's just a case of matching your eye, whereas in the practice round it wasn't really the case."

Warren, 17th in the European Tour Race To Dubai rankings, seemed content with his game and did not wish to focus on two birdie putts that went close at the 15th and 18th holes.

"In terms of ball striking, I struggled for most of the front nine but I ground away pretty well and in the back nine I hit it a lot better," he said.

"I was struggling to get it close enough to give myself good birdie chances but I hit a lot of greens in the back nine and overall I am really pleased with one over.

"I was really pleased with how I putted all day. The putts weren't really birdie chances. I'm very happy. I'll go to the range. I know what I'm doing."