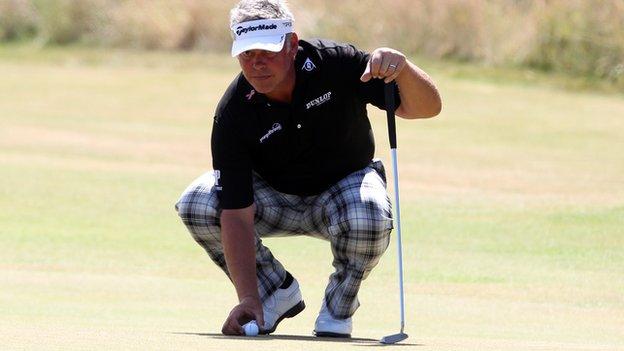 Darren Clarke is best placed of the Northern Ireland contingent on one over par after the first day of the Open.

The 2011 champion posted four birdies and five bogeys, including three bogeys in his last five holes, with a birdie at the 17th hole sandwiched in between.

Graeme McDowell carded double bogeys at the ninth and 15th in a four-over 75, while Rory McIlroy signed for a 79 after struggling early on at Muirfield.

Ballyclare's Gareth Maybin is seven over, 12 behind leader Zach Johnson.

"Some silly mental errors cost me - I played far too many loose shots," said the world number two from Holywood, County Down.

McDowell had two birdies and two bogeys in his opening round, but struggled to find the form which saw him win the recent French Open.

Former Masters winner Johnson leads on five under, with Rafael Cabrera-Bello and Mark O'Meara four under.

Padraig Harrington, twice winner of the Open, lies two over, with Shane Lowry three over.

Maybin, Clarke and McDowell are among the morning starters for the second round on Friday, with McIlroy beginning at 14:45 BST.