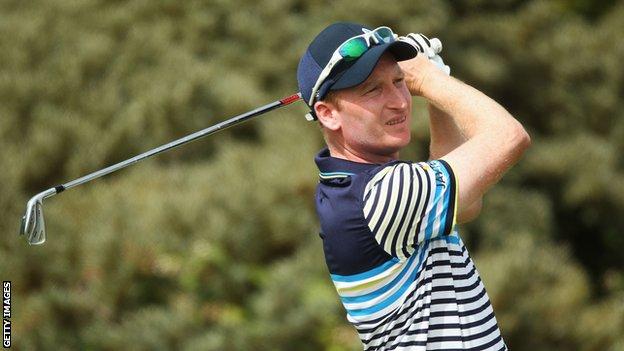 Kent professional Steven Tiley was left frustrated after an opening round one-over-par 72 at Muirfield that threatened to be even better.

The man from Herne Bay shot to three under, when he birdied three of his first five holes.

But, after reaching the turn in two-under, he came home in 38 after two double bogeys at 14 and 18.

Tiley was still eight shots better off than Londoner Brian Davis, who carded a first-day 80.

Florida-based Davis, 38, who breezed through US Final Qualifying at Gleneagles County Club, Texas in May, suffered his worst round at an Open since Carnoustie in 1999.

Davis resumes at 13:01 on Friday afternoon with an awful lot left to do to make the cut, while Tiley, who at one stage enjoyed the first round lead at St Andrew's three years ago, is back out at 15:51 BST.

But this time, in perfect weather, the Islington-born Arsenal fan had nobody to blame but himself.

"It's obviously a tough golf course," said Davis. "But this is the easiest you're ever going to see this course play.

"If you're going to go and shoot a score, today was the day to do it. But I didn't hit good shots.

Davis got off to a bad start with a bogey at the first - and four more shots went on the front nine as he turned round in 41, after bogeys at six and seven and a double at the 554-yard par-five ninth.

And it did not improve much on the back nine, as he suffered another double, a six at the 379-yard 12th, followed by another bogey at 13.

"If I came off feeling pleased after shooting a score like that, then I need to pack up and get another job," he half-grinned. "But I really am disappointed with that. If you don't hit good shots, you get punished."